Tibet, known for its beauty and stunning plateau landscapes as well as unique Tibetan culture and Buddhist culture, has attracted many travelers to explore the region. When you travel to Tibet, 3 famous tourist attractions that listed as the World Heritage Sites are recommended to you.

The Potala Palace is a symbol and landmark of Tibet. Originally built by King Songtsen Gampo in the 7th century, Potala Palace is located on the Red Hill of Lhasa. The magnificent white and red building complex, lined with green mountains and blue sky, is an iconic image of the Roof of the World. It is a huge treasure trove of Tibetan history, religion, culture and art. Potala Palace is well-known for its precious sculptures, Buddhist statues, murals, antiques and religious jewelry. Potala palace is the holy place of Tibetan Buddhism as well. Every year there are countless pilgrims and tourists. Potala Palace is suitable to visit all the year round, so during the peak season of Tibet from April to October, especially from June to September, tourists should queue to visit because of the limit of travelers, to protect the building complex.

Jokhang Temple, together with the Potala Palace is the must see in Lhasa. Jokhang Temple, located in the center of the city, is the true spiritual heart of Lhasa. Jokhang temple is the most sacred temple in Tibet, with an otherworldly mix of butter lamps, wafting incense and prostrating pilgrims. It is is listed in the World Cultural Heritages with Potala Palace and Norbulingka. Visiting Jokhang Temple for a real discovery tour in the mysterious and sacred land, you can get close to the religious part of Tibet and experience the devotion of Tibetans. The Jokhang Temple complex includes several decorated shrines and rooms. The main hall of the temple houses the Jowo Shakyamuni Buddha statue, perhaps the most revered figure of Buddha in Tibetan Buddhism. There are also famous statues including Chenresig, Padmasambhava, as well as King Songtsan Gambo and his two famous foreign brides, Princess Wencheng (niece of Emperor Taizong of Tang Dynasty) and Princess Bhrikuti of Nepal.

Norbulingka Palace, located in the western suburbs of Lhasa and built in the 1840s, is a typical Tibetan-style garden. After more than 200 years of expansion, the garden covers an area of 360,000 square meters, with more than 100 species of plants. There are not only flowers and trees commonly-seen in Lhasa area, but also exotic flowers and plants from the south and north foots of the Himalayas, and rare flowers from the mainland transplant or imported from abroad. It can be called plateau botanical garden. With 374 rooms, Norbulinka Palace is the largest and best scenic garden among the artificial gardens in Tibet, with most historic relics. 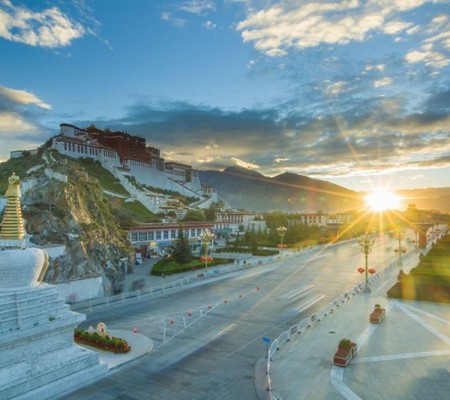