For people going to Tibet for the first time, taking a train is the top choice. Over 10 million tourists have hopped on Tibet trains on the Qinghai-Tibet Railway to visit the Holy Land, Tibet. Normal speed trains has already been open to traffic since July 1, 2006. Numerous tourists have taken Tibet trains to Lhasa from the major cities of mainland China such as Beijing, Xi’an, Shanghai, Guangzhou, Nanjing,  Taiyuan, Zhengzhou, Chongqing, Xining, Lanzhou, etc.

According to the route and the season, the Tibet ticket fares vary differently. The longer you travel, the more it costs. The journey between Lhasa and Xining only take 24 hours while many other trains take about 3 days. So it’s more expensive taking the ride from Beijing, Shanghai or Guanzhou to Lhasa than from Xining. However, in the peak season from May to October, it is difficult to get train tickets to Tibet due to the great demand. So ticket scalping is common during these tourist peak seasons. Usually you’ll spend more to get a ticket to and fro Lhasa in the peak season.

Mysterioustibet.com, is a professional Tibet travel agency which has established stable relationship with the railway station tickets office. So if you are in need of help, we can provide the ticket booking service for you. From the below list, you can get the detailed information about the train schedule and ticket fare of each train to and fro Tibet.

Nagqu and Lhasa are both under the jurisdiction of Tibet Autonomous Region. Located in the north of Tibet-between Tanggula Mountains and Nyainqentanglha Mountains, Nagqu get its name from the Nagqu River(upstream of...

travel between Chongqing and Lhasa by train is available for tourists, the distance between them is about 2286 km. At the altitude of 3658 meters, Lhasa is the holy land of... 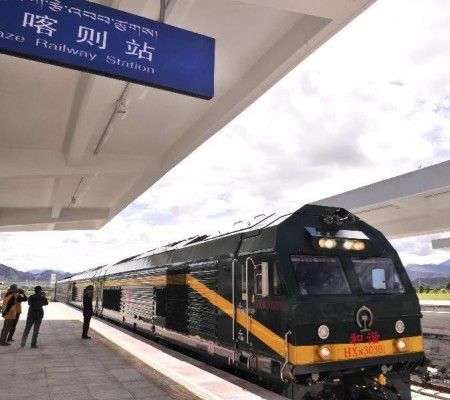 Shigatse and Lhasa are both under the jurisdiction of Tibet Autonomous Region. As the first batch of national historical and cultural cities, Lhasa is famous for its beautiful scenery, long history, unique customs, strong...