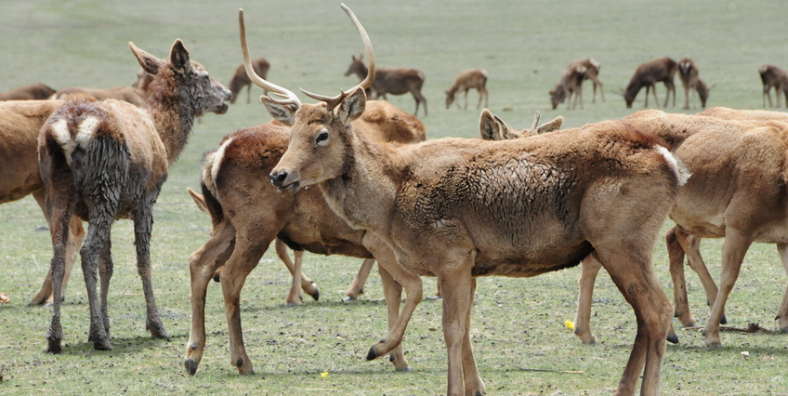 Chamoling Deer Training Area（长毛岭野鹿驯旅游区）is about 60 kilometers to the northwest of Riwoqe County, Chamdo Prefecture, Tibet Autonomous Region. Chamoling (Tramoling, Pinyin: Changmaoling), which is already mentioned in the Gesar epos, was declared a Nature Preserve in 1976 to protect its wildlife, especially the population of Red Deer, which due to the efforts of the local people and administration has survived. In many areas in Tibet deer populations went extinct in the 1960s and 1970s. In addition the area is supposed to contain populations of Snow Leopard, Wolf, Tibetan Brown Bear, White-lipped Deer, Musk Deer, Goral, Blue Sheep, Eared Pheasant, Brahminy Shelduck, and Crane to name a few rarer species.

The forest department has hired one wildlife guard to ensure wildlife protection in an area of 637 km2, which has an altitude between 3850 meters and 5274 meters. The landscape is dominated by the Grassland Mountains used for grazing. The forests, besides a few patches, have already disappeared a long time ago as they did in many other areas of Riwoqe. Valley grounds of the middle reaches of the Ke Chu are wide, but already too high up for agriculture. The higher peaks are barren and rocky. Yak husbandry is the main mean of local sustenance of the Khampas. Their houses are not two storied as in more fertile areas of Kham, but very low, one storied flat roofed houses. Before 1976, a herd of 60 Red deer was captured and is kept in captivity, now counting 120 deer. Yet herd growth is stagnating for many years due to fodder shortage in winter and the limited space allotted. The antlers of the deer are used as Chinese medicine and thus make keeping the herd a profitable business.

The forest department, which also is in charge of wildlife, asked ASIA to assist in finding a deer farm expert to train local people in order to improve deer keeping and breeding as well as antler production. In addition a better fodder base is required, a well needs to be dug within the compound, and the compound itself needs to be enlarged. Future plans include looking into the possibility of processing the antlers into medicine within Riwoqe. In regard of the wider preserve we intend to carry out a scientific study on the status of wildlife in the Chamoling preserve and we want to map out the area to ensure good protection of the most important wildlife habitats. The core issue, besides poaching, seems to be the intensive use of the area by pastoralists. The wildlife might be marginalized by domestic livestock, but at least they have coexisted for centuries.