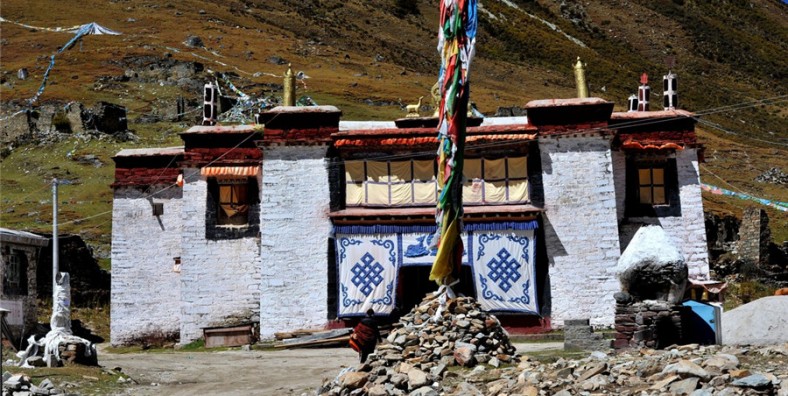 Chokorgyel Monastery（穷果杰寺）is also known as Quekejie Monastery（却柯杰寺）as well as Qiongjieguo Monastery（琼杰果寺）, which is situated in Cuijiu Township（崔久乡）, Gyaca County（加查县）, Lhoka Prefecture, Tibet Autonomous Region. The original building was the main monastery that is 5 stories high, with 58 columns and a golden crown. By the time of the 5th century, it was first known that Dixi Sangjiejiacuo（第悉桑杰嘉错）helped to expand the monastery, forming a building complex of nearly 4,000 square meters. There are footprints on the Mani Stone Shrines on the hillside behind the monastery. In the grass outside the monastery, there is a stone slab, which is greatly admired by the worshipers, and said that the stone could see the image that makes people’s dream come true. Chokorgyel Monastery is located on the way to the holy lake, which can offer visitors the accommodation. Visitors to the holy lake usually stay here for a night, and the next morning, they can walk or ride for about 4-5 hours on the horseback to the famous holy lake Lhamo Latso（拉姆拉错）.

In 1509 Gedun Gyatso, the 2nd Dalai Lama, had a meditation cave and founded a hermitage here. The Gelugpa monastery of Chokorgyel (Tibetan: ཆོས་འཁོར་རྒྱལ་དགོན་པ་), is about 115 km northeast of Tsetang and about 160 km southeast of Lhasa. The monastery is at an altitude of 4,500 m, while the lake itself is at an altitude of about 5,000 m. It is a small, oval lake – no more than 2 square kilometers in size.

The monastery was an important halting-place for many senior lamas on their treks to and from the ‘Vision Lake’, Lhamo Lha-so. It once housed 500 monks but was completely destroyed during the Cultural Revolution when every bit of wood was removed from the buildings, leaving only roofless walls. The main hall has since been rebuilt and a few monks have taken up residence once again.

Description of the Monastery and its Surroundings

The monastery is situated between three mountains. Mount Zhidag to the north is the “white” residence of the ancient Bonpo protector of the earth, Shidrak, at the foot of which is the Dalai Lamas’ residence. Higher up are the remains of a temple in which is the footprint of Damchen Choje, the ‘Dharma Protector Bound to Service’. Above this was the now-destroyed meditation cave of the 2nd Dalai Lama, although his footprint in stone has survived in a Mani wall. The mountain to the south, Shridevi, is the “blue” residence of the Protectress Palden Lhamo on which the dundro or sky burial site is located, and to the east, Mount Begtse, the “red” mountain residence of Protector Begtse, or Chamsing, who was imported by the Gelugpa from Mongolia. On the eastern slope of this mountain is an ancient interdenominational Red Hat gompa called Nyingsaka (composed from: Nyingma, Sakya and Kagyu).

The monastery is in the upper Metoktang Valley in the old province of Dakpo at the “geomantically powerful confluence of three rivers.” It was originally built in a triangular form to reflect the symbolism of its position at the confluence of three rivers and surrounded by three mountains and also represents the conjunction of the three elements of water, earth and fire, as well as the female principle of Palden Lhamo in the form of an inverted triangle.[13] The ruins, with their massive walls include two monastic colleges or dratsangs and two large temples, the Lukhang and Tsuklakhang.

At the centre of the monastery complex there is a small pillar engraved with sutras and a Buddhist swastika. The Lukhang, to the west of this, is the temple of the Serpent Protectors, which was built over the original hermitage of the 2nd Dalai Lama. It is said to have been built by red eagles (kyungka, garudas). On the walls of the main temple, the Tsuklakang to the north, damaged murals can still be seen. This used to house a large statue of Mipam Gompo which dated back to the founding of the monastery.

The highway traffic system is perfect; visitors can choose self-driving tour in Gyaca County. The closest airport is Lhasa Gonggar Airport about 203.1 km from Gyaca County; there are 259.3 km from Nyingchi Mainling Airport to Gyaca County. Tourist can travel by air firstly and then transfer to long-distance bus or self-driving which is the major choice.