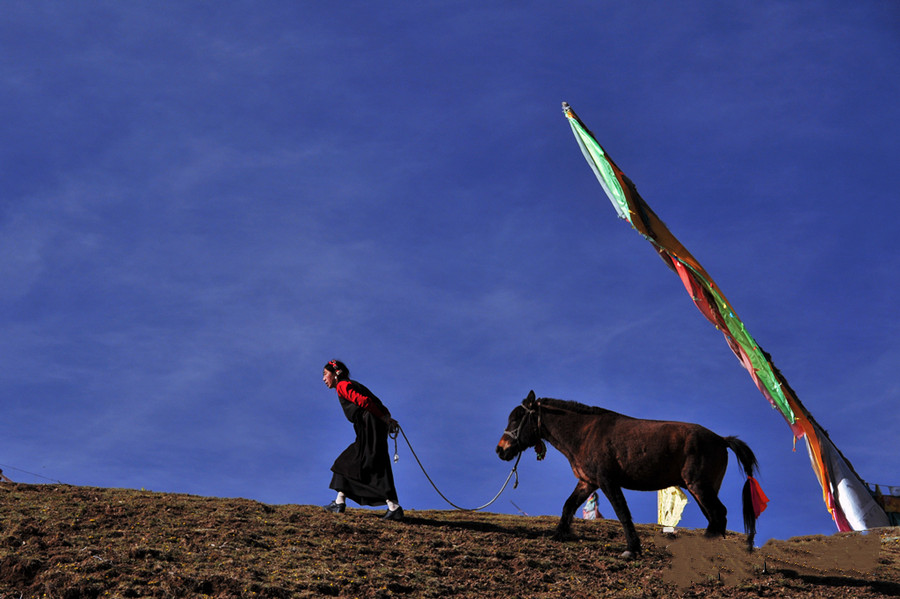 Eighty-five-year-old Lhakyi is a resident of Dongxiong Village in Jindong Township, part of Nang County in Nyingchi City, southwest China’s Tibet. Inside a two-story Tibetan style house, Lhakyi’s daughter, Bajia Drolma, told reporters: “When my mom heard you were coming, she was so excited she couldn’t fall asleep last night.”

After taking a sip of the butter tea, Lhakyi started to tell her story. “Before I was born, my mom was a serf who worked for two estates, so I was a serf too when I was born,” she said.

“When I was a kid, I had to shepherd the cattle and cut the grass every day. If I didn’t fill up two buckets with enough grass, I’d certainly be beaten. The bucket was taller than me. When I grew up to a teenager, the farm owner made me carry highland barley, and I often had to carry 30 or 35 kilogram of grains a time to another estate several kilometers away on the mountain road.”

“The roads were hard then, broken rocks were everywhere. I had no shoes, and my clothes were shabby too. After every trip, wounds covered my body and feet. There was no money for medicine. When it was too painful to bear, I’d go to the river nearby to have a wash on my wounds.” Lhakyi had an older sister who was a serf too, tragically, she was severely beaten for not finishing the heavy work assigned by the farm owner and soon got dead.

In 1959, the People’s Liberation Army (PLA) arrived in the village, and a villagers’ assembly was held. It was announced that the serf system was abolished, and the villagers were given land and livestock.

Lhakyi said: “Our family got four mu （0.27 hectares）of land and a yak. When the PLA soldiers saw we had nothing to eat, they gave us some grains too. We made a big meal that day. It was the first time I had a full meal.”

“With all the help we were given, we were able to feed ourselves by the following year and never went hungry again. Soon, we had our daughter, Bajia Drolma,” Lhakyi said and patted her daughter’s hand.