Mount Kailash overview can help you have a more comprehensive understanding of Mount Kailash from the basic information, geographical location, climate, transportaiton, trekking route and so on.

Mount Kailash(6638m)  is a majestic pyramid of rock and snow situated in western Tibet following the reverent lake Manasarover in the same region 45 km away at the altitude of 4590m. As one of the famous mountains in China, it is located in the northern part of Burang County, southwest of Tibet Autonomous region. It means "holy mountain" in Tibetan. At the altitude of more than 6000 meters above sea level, there are 28 modern glaciers, mainly corrie glaciers and hanging glaciers. There are more glaciers on the south slope than on the north slope.

Although the height of Mount Kailash isn’t so significant, ascending to peak is very challenging because of its steep slopes. Mt. Kailash and the headwaters of the Indus River are located in the Gangdise Mountains north of the Tsangpo Suture. The Tsangpo Suture is a thrust fault representing the Eocene boundary of the Indian and Asian plates, with subsequent right lateral strike-slip displacement. The high average elevation of this area (about 17,000 feet) is typical of the western Tibetan Plateau and results from the ongoing penetration of India into Asia.

The Mt. Kailash and Indus headwaters area is characterized by extensively faulted and metamorphosed late Cretaceous to mid Cenozoic metasedimentary rocks which have been intruded by Cenozic granitic rocks. Faults are generally oriented NW-SE. With the exception of the Xiangquan basin which contains late Cenozoic sediments, Paleozoic and Mesozoic rocks generally occur south of the Tsangpo Suture in NW-SE elongated fault bounded blocks. Paleozoic rocks represent offshore marine limestones deposited before subduction of the Tethys oceanic crust. Mesozoic sediments were deposited on the southern margin of the Asia block during subduction of the Tethys oceanic crust and prior to the collision between the Indian and Asian continents. North of the Tsangpo Suture, a large sheet of Late Cretaceous to mid Cenozoic clastic sediments unconformably overlies these rocks. These sediments were derived from the volcanic highlands during the early stages of collision. Cenozoic granitic rocks probably represent the low melting temperature fraction of subducted oceanic basalt and Indian continental crustal rocks.

Kangrinboqe is recognized as the holy mountain in the world, and it is regarded as the center of the world by Hinduism, Tibetan Buddhism, ancient Zhang Zhung Buddha Dharma “Bonismo” and ancient Jainism. Hindus regard the peak as Shiva's symbolic 'Lingam' and worship Mt Kailash, which is the Sanskrit name for the mountain. Bonpos believe the sacred mountain to be the place where the founder of the Bon religion landed when he descended from the sky. Tibetan Buddhists believe Kang Rinpoche, which means Precious Snow Mountain, is a natural mandala representing the Buddhist cosmology on the earth and the Jains believe this is the place where their religion's founder was spiritually awakened. Shiva, the most powerful of the three gods of Hinduism, lives here. And the upper reaches of the India’s Indus River and Ganges River originate here, so a large number of Indian pilgrims can be seen at Mount Kailash. For centuries, Mount Kailash has been a sacred place for pilgrims and explorers, but no one has been able to climb the mountain, or it can also be said that no one has dared to offend the center of the world.

More about History of Mount Kailash

Like most areas of Tibet, the Mount Kailash have a large temperature difference between daytime and night. The climate is mild and pleasant from May to August. The average temperature in Summer is around 15℃, which is ideal for outdoor activities, such as going for kora and visiting nearby temples. Heavy rainfall from July to August makes it harder to pass through the rugged path in this area. From September to November, rainfall is less and the average temperature drops to 10℃. December to April in the following year has the coldest days in the whole year. Winter temperatures range from 5℃ to minus 15℃, and the surrounding areas of Mount Kailash are often covered by snow and ice, making it dangerous to get there. During these periods, sharp temperature reduction often occurs.

Among the four seasons, the best time and season to visit Mt. Kailash is spring and autumn (Feb – May and late Sep – Nov), which are the main trekking months with fairly stable weather conditions and good visibility.

Late February to early May are popular months for trekking, with the weather warmer and flowers in bloom on the side of the road. Longer days with more sunlight coincide warming temperatures, less precipitation and good visibility, all of which provides tourists with great chances for trekking. Besides, another great time for visiting Mt. Kailash is from October to Early November, when the sky is clear, air is fresh and temperatures are comfortable. The Mt. Kailash has been washed clean by the monsoon rains, and looks particularly lush and verdant.

In addition to a good weather condition, the festival is also a factor that attract tourists to visit Mt. Kailash. Every year from May to June, pilgrims from all over Tibet and Asia come to Tibet to celebrate Saga Dawa Festival, which is one of the most solemn and important religious festivals in Tibet. On that day, tourists can join the pilgrims to erase their sin of a lifetime. Our 14 Days Tibet-Nepal Overland Tour with Saga Dawa Festival and Mount Kailash is recommended to you for the festival.

Things to Do at Mount Kailash

Currently Ngari Prefecture can only be reached by driving and flight. There is no railway constructed yet. Travelers can take flights to Ngari from Lhasa or Urumqi and Kashgar in Xinjiang Uygur Autonomous Region, then drive to Darchen to start the trek. The most chosen way is to take Lhasa as first arrival as it has flights from Beijing, Xian, Chengdu, Chongqing, Shanghai, Guangzhou, Kunming, Shangri-La and other places, as well as trains from Beijing, Shanghai, Chengdu, Chongqing and Guangzhou to Lhasa.  No matter which route you take to Lhasa, whether by plane from Kathmandu or by train or plane from mainland of China, you will need a few days to acclimatize to the altitude in Tibet. In order to better adapt to the altitude of the plateau, tourists usually stay in Lhasa for two days, visit the scenic spots there first, then set out for Mount Kailash.

Most of the travelers choose to stay at Darchen Town at the foot of the Mountain Kailash, it is also the starting and ending point of the Mount Kailash Trekking.  The best hotel in Darchen Town is Himalaya Kailash Hotel which is likely a 3-star standard hotel, but it's quite expensive compared with other basic hotels and guesthouses. There are three Tibetan monasteries along the trek – Chuku Monastery, Dirapuk Monastery to Zutulpuk Monastery. The houses are in or near the monasteries, constructed by stones and earth. Camping is always the favorite option for trekkers. There are several camping sites along the trek.

Trekking in the region normally consists of taking the Mt. Kailash inner or outer kora routes, or trekking the kora around Lake Manasarovar. The trek around Manasarovar is a beautiful walk, which is not daunting or arduous, and takes you to all five of the monasteries that sit on the lake’s shores. While it is a four-day trek that covers 110 kilometers, it is a nice walk around the lake, and despite being able to drive all the way around, walking is still the best way to see the lake.

Mt. Kailash, however, has two trekking routes, the Inner Kora and the Outer Kora, and both are hard and arduous treks, with the inner being harder than the outer. Most people walk around the outer kora, as it gives a great view of the landscape in places, and has good views of Kailash from all sides. The inner kora only runs up to the south face of Kailash and back in a small loop.

At only 30 kilometers, the inner route around Mount Kailash is shorter, but has more climbing and more passes and cliffs to get over. Starting at Darchen, the route heads north to Selung Monastery, before heading along under the western face of Yinjietuo to a viewing point where you can see the famous “ice swastika”, formed by cracks in the ice on the south face of Kailash. From there the route follows the trail to Gyangdrak Monastery, going past 13 chortens that are the final resting places of the relics of 13 ancient Gyangdrak administrators, who are enshrined within. After visiting the Gyangdrak Monastery, you will follow the eastern foot of Yinjietuo down towards Darchen and the end of the kora.

The whole circled route is about 52km trekking. For some Tibetans, 15 hours will be enough to finish this kora, while it may take 2 nights and 3 days for most tourists on foot. Since every little element of this trip will be arranged well by our tour guide, your journey will be enjoyable. Below is the kora route during these days.

Note: For the Buddhists and Hindus, Mount Kailash Kora is taking along the clockwise, and for Bon adherents, the Kora is in the opposite direction.

On route, you will enjoy the stunning landscape of green valleys and crystal blue lakes. Also the views of Mt. Kailas’s are spectacular and majestic. The pyramids shaped mountain with four symmetrical sides, reaching sky by its glistening snow-capped summit, enveloped by white clouds is quite eye-catching.  Many tourists get to Mount Kailash not only for mountaineering but also for shooting a gorgeous picture. It is easy to shoot beautiful photo at Mount Kailash. However, if you would like to make innovation or create breathtaking photo with strong visual impact, patience and luck are necessary. 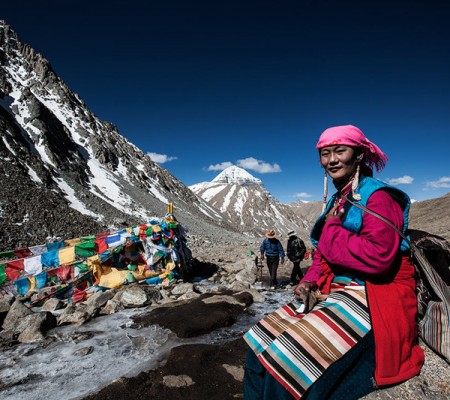