Nagqu Culture introduces how many minorities in Nagqu including the information of ethnic people, ethnic cuisine, rituals, folk culture, religions, festivals, customs, habits, etc. Nagqu is a prefecture-level city located in the northern part of Tibet-between Tanggula Mountains and Nyenchen Tangula Mountains. It borders Xinjiang & Qinghai Province in the north and Chamdo Prefecture in the east, adjoin Lhasa, Nyingchi, Shigatse in the south and Ngari in the west. Covering an area of 450,543 square kilometers, Nagqu is the largest prefecture in Tibet. It has an altitude of 4,450 meters, the maximum distance of 233 km east-west, north-south maximum distance of 185 km, with a total area of 16,195 square kilometers. In 2000, the county had a national product of 131 million yuan. It is a wealth place full of colorful folk custom.

Nagqu appeared clearly in the earliest historical materials, it was part of the ancient Zhangzhung and it was called Yangtong (羊同) in Chinese historical records. In Tibetan historical records, the place was called "Zhuodai"(卓岱), meaning "nomadic tribe", and the inhabitants here were called "Zhuoba"(卓巴), meaning "nomads"; or "Qiangba"(羌巴), meaning "northerner"; or "Changri", it means the northern tribe. In the era of the ascendancy of Zhangzhung, as its inhabitants divided their territory into the inner, outer and middle three parts. The modern Nagqu roughly is the territories of middle Zhangzhung and outer Zhangzhung. The dzong architecture of Dangnuoqiong was the center of middle Zhangzhung, it was located round the lake of Tangra Yumco in the southwest of Nagqu. As the Zhangzhung Regime was weakened, its territory shrank to the west.

Throughout the ages, the temples have carried people's beautiful sustenance to life, attract countless believers to come to worship. The temples in Nagqu can be described as numerous. There is always one that will make you stay and feel the beautiful sceneries of Nagqu. What's more, the monasteries and temples in Nagqu are the best places to experience the Buddhism Culture.

More about Temples and Monasteries in Nagqu

Architecture in Nagqu is a wonderful reflection of its culture. Nagqu Architecture is influenced by its geography, climate, culture, Tibetan Buddhism, etc. In the pastoral area, the tent is generally used, and the tent is woven with the yak knitting wool and is decorated with the traditional pattern. The tent is not only beautiful designed, but also keeps out wind and rain, warm in winter and cool in summer, removed conveniently, deeply loved by the herdsmen. The house in the agricultural area is mostly civil structure, usually two layers, and the lower layer is provided with sundries, and the upper part is the living room, the kitchen, the bedroom and grain depot, and the herbage and the grain are aired on the balcony. This kind of house also has three and four layers.When you are in Nagqu , you will see prayer flags on the roof of the houses in Nagqu .

What's more, the feature of Nagqu architecture is that many of the houses and monasteries are built on elevated, sunny sites facing the south. The roof of Tibetan houses are flat so that it is easier to remove frequent snows. The flat roof is also built to conserve heat as little fuel is available for heat or lighting in Nagqu. Each house has many windows for letting in sunlight. Walls are usually sloped inwards at 10 degrees as precaution measures against frequent earthquakes in the mountainous area. The most scientifically and aesthetically valuable Nagqu architecture is Tibetan Buddhist monasteries, such as Zandan Monastery, Bangna Monastery.

Nagqu cuisine includes the culinary traditions and practices and its peoples. The cuisine reflects the Tibetan landscape of mountains and plateaus. It is known for its use of noodles, goat, yak, mutton, dumplings, cheese (often from yak or goat milk), butter, yoghourt (also from animals adapted to the Tibetan climate) and soups. Vegetarianism has been debated by religious practitioners since the 11th century, but is not prevalent due to the difficulty of growing vegetables, and cultural traditions promoting consumption of meat.

Nagqu Horse Racing Festival is the greatest annual event in northern Tibet. It has a long history and can be traced back to the 8th century when the Gar family was in power ruling Tibet in the name of the kings of Tubo Kingdom. Affected by the Tibetan Buddhist culture, the horses are closely related to the life of Tibetans as a material and spiritual aspiration. Like many nomadic peoples in the world, Tibetans and horses are very closed. Nagqu Horse Festival, which is named "Daqiong(达穷)" in Tibetan language, is a large-scale traditional festival in northern Tibet. Every year on August 1st, the Nagqu Horse Racing Festival kicks off in Tibet and lasts five to fifteen days.

The traditional way of Tibetan marriage would be of four stages; Matchmaking, bride-fetching, wedding and bride’s returning home.Due to the sparsely populated area, the marriage method is relatively simple. Most of the marriages are mainly the freedom to choose one's spouse. In terms of form, young people still respect the opinions of their parents. Please ask relatives and friends to be a matchmaker. The scale of the wedding depends on the both families' financial situation. On the day of the wedding, both families will hold the burning  aromatic plant ceremony to sacrifice their homeland gods. The Nagqu marriage ceremony begins as the girl and her friend would enter the boy’s house. the local people of the village would sings and dance as she walks towards the new family. The new family would welcome her to the house by offering her Chang Tibetan beer and offer bowl full of tsampa, which pinch a bit and places it on her forehead and prays, she will then  throw into the air as an offering to god. while others are busy in the welcome procession, they will be an old women from this family, shouting on the rooftop ask the bring the good luck charm to this family.

The characteristics of Nagqu Pot Chuang are very obvious, that is, bold and unrestrained. The environment of high and cold, dry and windy in northern Tibet set the tone for the Nagqu dance including the Nagqu Pot Chuang. Nagqu Pot Chuang not only shows the dance posture but also expresses the emotional performance. It not only reflects the Tibetan people's simple and kind, diligent and brave, passionate and unrestrained national character, but also has certain strength and running and jumping changes. The action has a large range of motion and has obvious sports dance training value and exercise value. Whether it is from the decoration of the performer, the rhythm of the action, or the change of the dance during the performance, the style of Tibetan folk sports can be reflected.

The national dress of Tibetan people is the skirt robe, a long-sleeved loose coat worn by both men and women. The men wear a shorter version with pants underneath. The skirt robe is often made over-sized to accommodate the Tibetan way of living. When tied around the waist by a belt or sash, the upper part of a skirt robe turns into a huge pocket for carrying things, from personal items to small livestock and even a baby. When it is hot in the daytime, Tibetans undress the right arms to disperse heat. If it is even hotter, then one may undress both arms and tie the sleeves around the waist. The garments of the Tibetan costume can be made of brocade, silk, embroidered silk, satin, jacquard, leather, animal skin, wool and cotton.

In the ancient and holy land of Nagqu, since ancient times, there have been 17 ethnic groups including Han, Tibetan, Hui, Salar, Uygur, Miao, Mongolian, Tujia and Yi. In the long-term common life, the people of all nationalities have established a deep friendship. Especially in recent years, children of all ethnic groups live in harmony, unite wisdom, and create a good situation for the development and stability of the Nagqu area, making an indelible contribution to regional economic and social development.

Intangible Cultural Heritages and Its Inheritors in Nagqu

Dunzhu- Inheritor of Folktale of Lhari County in Nagqu, Tibet 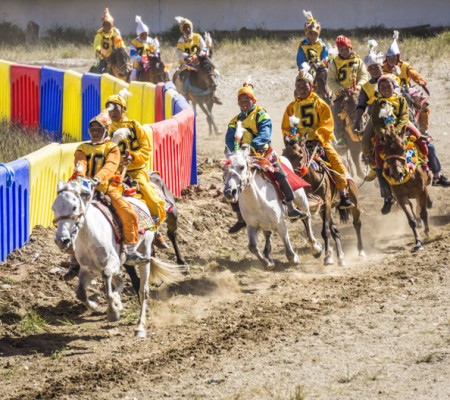 Nagqu is a prefecture-level city located in the northern part of Tibet – between Tanggula Mountains and Nyenchen Tangula Mountains. It borders Xinjiang & Qinghai Province in the north and Chamdo Prefecture...