Nyalam County occupies an area of 8684．39 square km with a population of over 12,000. Among them, there are 5,000 Sherpa people. Nyalam County is located between the Himalayan Mountains and Laguigangri Mountains.

Miarepa's Cave
The only cultural sight close to Nyalam is Miarepa's Cave. Milarepa was a famous Buddhist mystic and composer of songs (Tibet's St Francis of Assisi) who lived in the late 11 and early 12 centuries. During his time spent in long meditation in this cave he renounced all luxuries and survived on a diet of local weeds (famously turning green as a result).The cave is signposted "Milaraba Buddist Practice Cave" and is 10km north of Nyalam, at Gangka village.

Lhotse (洛子峰)
Lhotse, after Mount Everest, K2, and Kangchenjunga. Part of the Everest massif, Lhotse is connected to the latter peak via the South Col. Lhotse means “South Peak” in Tibetan.

Peikucuo Lake(佩枯措)
Peikucuo Lake is the largest lake in Shigatse area, covering an area of 300 km².

Shishapangma(希夏邦马峰)
Shishapangma, also called Gosainthān, is the 14th highest mountain in the world at 8,027 metres (26,335 ft) above sea level. It was the last 8,000 metre peak to be climbed, due to its location entirely within Tibet and the restrictions on visits by foreign travelers to the region imposed by authorities of the Government of China and of the Tibet Autonomous Region.

Zhangmu Port(樟木口岸)
The beautiful Zhangmu Port, also known as Kasa, is Tibetan border town about 10 km (6 miles) inland from the Bhotekoshi or "Sun River". Located on a mountainside with subtropical climate, Zhangmu Port is surrounded by lush greenery and damp fresh air.

In the Zhangmu Town there is Zhangmu hotel, also there are some ethnic characteristics of the family hotel opened by local residents, loved by Chinese and foreign tourists.

Zhangmu Town, 2300 meters above sea level, is a typical mountain city built along the winding mountain road, modern buildings and ancient log cabin crisscross, the scenery is pleasant. Han, Tibetan and Nepal live together. From Nyalam County to Zhangmu Ttown is 30 km, 1 hour driving, along the road is steep and bumpy with towering tree. It is interesting that waterfall hanging down from fog, the vehicle is passing through under the waterfall, which will give you a life-enchanting trip. Along the way and go down the street to the end is the Chinese customs, a few miles away is the China-Nepal border Friendship Bridge.

During the tourist season, Nyalam County has long distance buses to Lhasa, Shigatse, which takes about 18 hours. Its departure time is fixed, every week there are about two to three buses. At the same time, many tourists are charter car or thumb a lift. Also there are buses send some foreign visitors out of the town, some will be returning empty, so hitchhiking is comparatively easy.

China National Highway 318: the national highway no.318, high mountains and deep gorge of the Matsang Tsangpo or Sun Kosi as it is known in Nepal. The road between Tingri to Zhangmu Port was one of the most magnificent sightseeing drive in Tibetan trip, high snow mountains, deep valleys, blue sky and white clouds… 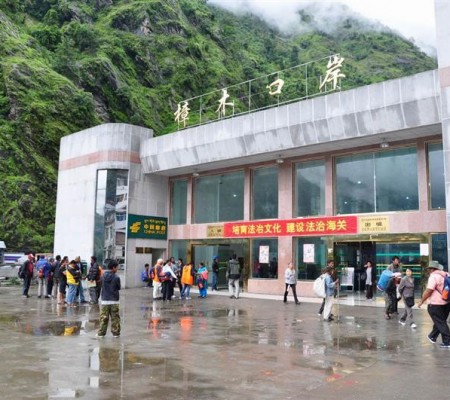 Located in Nyalam County on the Nepal-China border, Zhangmu, about 776 km (482 mi.) away from the capital of Tibet Lhasa, (also as Dram in Tibetan Language or Zham in Nepali)...