The Sakya Monastery（萨迦寺） is divided into the south and north, two monasteries. The north monastery is located on the northern bank of Chongqu River（冲曲河）, which was founded in the six years of the Northern Song Dynasty (1073 AD) with a really great scale. The main buildings are Wuzi Lakang（乌孜拉康）, Xiongya Lakang（雄雅拉康）, Gangga Lakang（刚嘎拉康） and so on. Due to natural factors and man-made damages, most of the buildings in the north monastery have been broken, but the architectural patterns and scale still can be seen from the ruins. While the South monastery built in 1268 AD covers an area of about 45000 square meters. The south monastery which belongs to one of the four Tibetan Buddhism sects is the ancestral Sakya monastery. It was listed as a national key cultural relic’s protection unit by the state council in 1962.

Kawu Dharmaraja Hot Spring（卡吾法王温泉） is 18 kilometers away from the county seat. It is the place where the Dharmaraja of Sakya sect（萨迦法王）had his bath. Cawu Hot Spring covers an area of about 0.5 square kilometers, with the water temperature keeping constantly at about 83 ℃. There are five oldest springs, namely: the more DuoquDian（多曲殿）, Wuma Sisi（乌玛丝丝）, Lama Yimi（拉玛衣米）, Qiaqiong（恰琼）, and Qiran（启然）. Measured by the health department, Kawu Dharmaraja Hot Spring whose water density is larger than general springs contains 27 kinds of trace elements beneficial to human body. People can feel great buoyancy in the water. What’s more, the spring which has special curative effect is beneficial for treating stomach disease, arthritis, skin diseases, limb numbness, etc.

Kawu Dharmaraja Hot Spring has a high profile. Due to the geothermal effect, the natural environment near the hot spring is also peculiar. Besides Snow Mountains and grasslands, visitors can view the wild ducks in the river in winter and rare hot spring snakes occasionally appeared on the edge of the spring.

Chonglashan Peak-view Stage（冲拉山观峰台） is 15 kilometers away from Sagya county town. "Chong la" means "the place where wild yaks cry" in Tibetan. Here you can view the east slope of the world's highest peak, Mount Everest, and the unique landscape of Mount Everest - the Qomolangma cloud.

After Natang Monastery（那唐寺） was accomplished, there are many famous monks here speak unknown method. The monastery had been broken once and then in 1987 rebuilt three halls on the ruins of the old one, which saved within the seven pieces of sixteen arhats stone carvings, a pair of footprints that the eighth abbot Jutun Menlangcuocheng（巨屯·门朗措成） left in his thirtieth on the stone of the monastery, and 8800 pieces of cultural relics including Kangyur《丹珠尔》.

Built in 1447 with the presiding of Sambuzasi（桑布扎西）, Gangqin Monastery（刚钦寺） is 45 kilometers from Shigaze City and 3,800 meters above sea level. It belongs to Gelug sect（格鲁派） with eight palace halls and one main assembly hall, two Dratsang（扎仓）and five Micun Village（弥村）. There enshrine the Pagoda of Sambuzasi in the main assembly hall. 50 meters away from the temple, there is a mysterious Guanxiang Lake, which is said that Sambuzasi dug out the lake that can view the future with his walking stick. 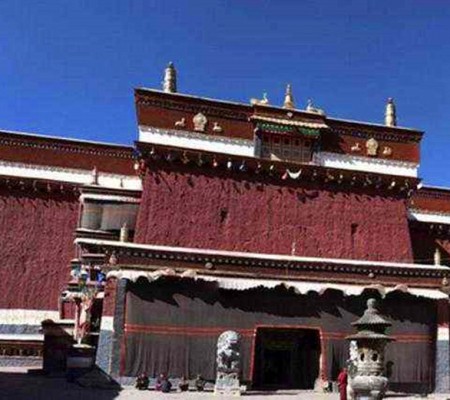