▪  Mount Everest（珠穆朗玛峰）：Mount Everest (Qomolangma) is the main peak of Himalayas, which is located in the boundary between China and Nepal with its north slope in Qinghai-Tibet Plateau and its south slope in Nepal. In Tibetan language, 'Qomo' means nymph and 'Langma' means the third because there are four peaks around Mount Everest and it ranked the third. As the highest peak in the world, the height of Mount Everest is 8844.43 meters according to the measurement of China's state bureau of surveying and mapping.

Appreciating Mount Everest from Tibet, China, the covered snow at the top of peak just like a magnificent pyramid and the terrain is steep and precipitous. While the scenery in Nepal is crushing so that if you can't appreciate Mount Everest in Tibet, it will be a great pity.

There are 15 glaciers with an area of more than 10 square kilometers. Among them, the largest Rongbuk Glacier（绒布冰川） is 26 kilometers long and the average thickness is 120 meters. Numerous glaciers are entrenched in valleys like jade dragons. Seracs , icy bridge and ice towers can be found everywhere.

The most magnificent building in Tashilhunpo Monastery is the Great Maitreya Hall（大弥勒殿） and Lingta Hall（灵塔殿） for the successive Panchen. In Tibetan language, the great maitreya is known as Qiangbakang（强巴康）, where consecrate the gilding bronze statue of Qiangba Buddha（强巴佛） which was presided over and built by the ninth Panchen, pan-chen-blo-bzang-chos-kyi-nyi-ma（曲吉尼玛） in 1914. The seven successive Panchen Lingta Hall are of varying sizes, some of them worship several Panchen, while others only enshrine one.

▪ Sakya Monastery（萨迦寺）：It  is located at the foot of Benbo Mountain（本波山）, Sagya County（萨迦县）, Tibetan Autonomous Region of. It is a Tibetan Buddhist monastery and the main temple of Sakya sect.

Sakya Monastery was listed as a key cultural relic protection by the State Council in 1961. Sakya in Tibetan language means the gray earth. Built in 1073 AD, Sakya Monastery has the walls decorated with the red color that symbolize the Manjusri（文殊菩萨）, the white colors that symbolize the Goddess of Mercy（观音菩萨） and the green color which symbolize the Vajrapani（金刚手菩萨）. As a result of this, Sakya sect is also known as the Huajiao（花教） which means the religious sect full of all kinds of colors.

There collected over 3000 murals in Sakya Monastery with the wide themes from religion, history, culture and social life, etc. to buddhist scriptures and discipline, myths, legends, historical stories, Sakya history, landscapes, flowers and auspicious beasts, and all types of decorative patterns which are grand in scenes and rich in content.

The scenery in Gama Ditch is very impressive with various rare wild animals and plants as well as the wonderful plateau lakes. Here, visitors can appreciate the world Highest Mount Everest and the world's fourth Mount Lhotse closely, can enjoy the panoramic view of the world's fifth Makarau（马卡鲁）, etc. The thrilling beauty that the world-class snow mountain gives visitors are extremely inaccessible and breathtaking, which like wandering in the dreamland---Shanghai-La.

▪ Paso Monastery（帕索寺）：Located in Paso Village, Samzhubze District, Shigatse City Paso Monastery which is known as the birthplace of the fourth Panchen Lama is listed as the key cultural relic’s protection units of Paso Autonomous Region. The monastery which belongs to Gelug sect was founded in 1300 AD, covering an area of 856.7 square meters.

▪ Shalu Monastery（夏鲁寺）：Shalu Monastery which is located southeast of Samzhubze District, is one of the larger Buddhist temples in Tibet, and is also the ancestral temple of the Tibetan Buddhism, Shalu sect. 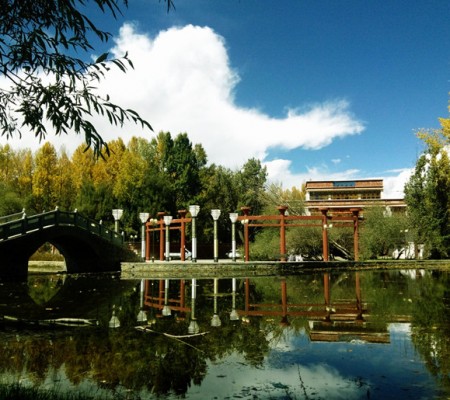