In January in Tibet year, there will be a great prayer festival or ceremony holding in Tholing Monastery (also called Mulangqinmu). At that time, besides the lamas in the monastery or nearby villages, lamas from the other 25 branch monasteries will also come to attend the great ceremony. During the 20 days’ ceremony, the villagers or other attendees except the lama will give the monastery lots of food in charity, such as zanba (an Tibetan food, roasted qingke barley flour), ghee or butter, rice, meat etc. From 18th to 19th January in Tibet year, the lamas in Tholing Monastery will perform a kind of grand religious dance-Qongmu. The performance will last two days, but the costume and stage properties they use are quite different. The stuff they use on 19th is much more luxurious and precious than on 18th. And also the number of audience increases a lot on the 19th. After the show there will be a grand exorcizing ceremony held on the square of the monastery, which is called Dorga. During this ceremony, firstly all the lamas in the monastery and all the audience go to the square together to attend the ceremony, and then they come back to the monastery. The local people wear millions of costumes (some of the costumes are passed down from mother to daughter one generation after another for tens of generations). They will dance Guoxie, Xianwu (two kinds of religious dances) until the next morning when the ceremony is over to pray for a good year.

Ceremony of Setting up the Sutra Flag

It is said that in the ancient time, there was a merchant named Nobu Sanbo carried a bag of gold on the back to worship the sacred mountain. But the journey was so far away and rugged, even after experiencing numerous hard passed he could not find the sacred mountain. However, he was determined to find the holly mountain until he used up all his gold. In order to memorize this long suffering and the poor merchant, the king of Ngari named the place where the merchant firstly arrived Ser Shon (Ser means gold and Shon means use up). He also orderd to hold the Ceremony of Setting up the Sutra Flag there every year, which is called Day of Ajuron. This festival become a legal festival and will last forever. 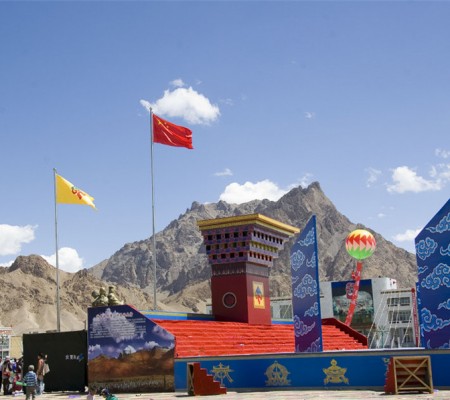