Dagzê is a county immediately east of the city of Lhasa, Tibet. Established in 1959, the county lies on both sides of the middle reaches of the Lhasa River. As of the total population are over 29,152, mostly ethnic Tibetans engaged in agriculture. The county is home to the Ganden and Yerpa monasteries.There are 14 temples and Rizhui Kanglas（日追康拉）, among which Ganden Monastery（甘丹寺） which is regarded as the first of the top six Gelug （格鲁派）monasteries among the four main sects of Lamaism was founded in the 15th century, with the history of over 600 years. Gandan Monastery which plays an important role in religion, architecture, art, etc. was listed as one of China’s key cultural relic’s protection units in 1961.

• Ganden Monastery（甘丹寺） is one of the great three Gelug university monasteries of Tibet, China. It is in Dagzê County, Lhasa. The other two are Sera Monastery（色拉寺） and Drepung Monastery（哲蚌寺）. Ganden Monastery was founded in 1409 by Je Tsongkhapa Lozang-dragpa（宗喀巴大师琵琶）, founder of the Gelug sect.

• Yerpa（扎叶巴寺） is only a short drive to the east of Lhasa, Tibet, and consists of a monastery and a number of ancient meditation caves that used to house about 300 monks.

• Dagze Golden Pond Ecological Scenic Spot is located in the territory of Dagze County, 29 km distance from Lhasa, covering an area of 1.9 million square meters (including wasteland and water area). Six kilometers east of Dagze County, it is located in 318 State Road, Lalin expressway and along the Lhasa River with a very convenient transportation.

• The Dagze Bridge（达孜桥） is a one-lane suspension bridge in Dagzê, Tibet. At the time of its completion in 1984, it was the longest spanning bridge in China with a main span of 500 m.

• Sanga Monstery（桑阿寺）, about 20 km from Lhasa City, is located in the old city center of Dagze County. The monastery built in 1419 AD by Tsongkhapa（宗卡巴）, so far has a history of 587 years. It belongs to the Gelug sect（格鲁派） of Tibetan Buddhism. According to the religious history practice, Sanga Monastery is the jurisdiction of the Ganden monastery.

Other Destinations in Dagzê District

The main attractions in Dagze County include the monasteries, Ganden Monastery（甘丹寺） and Yerpa（扎叶巴寺）, and the Dagze Bridge as well as the Lhasa River.Visitors can have an extraordinary view in the county.  Ganden Monastery Ganden Monastery（甘丹寺） is one of the great three Gelug university monasteries of Tibet, China. It is in Dagzê County, Lhasa. The other two are Sera Monastery（色拉寺） and Drepung Monastery（哲蚌寺）. Ganden Monastery was built after 1409 at the initiative of Je Tsongkhapa（宗喀巴）who’s the founder of the Gelug sect（格鲁派）, the most important one among the four sects: Gelug [...] 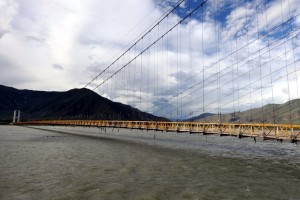 Here, we recommend and arrange some efficient and suitable tour routes and tour packages in Dagze County, in Lhasa and even in the whole Tibet for the travelers to provide a better trip and comfortable service. Here we list some attractive highlights in Dagze County for visitors to have a reference. They are the Ganden Monastery（甘丹寺）, Yerpa（扎叶巴寺）, the Dagze Bridge（达孜桥）,  the Lhasa River,  Sanga Monstery（桑阿寺）, and Yangbajian Monastery（阳巴坚神殿）.  [...]

Dagze is in a semi-arid plateau monsoon climate zone. The average temperature is 7.5 °C (45.5 °F), with about 130 days free of frost. Average rainfall in Dagze County is 450 millimeters with about 80%–90% of precipitation falls in the summer. It is best to travel to Dagze in June to August. Travailing during the time, visitors can avoid the cold winter and rainy season come to Dagze County, in the prayer flags fly to seek inner peace and detachment. [...]

There are several festivals celebrated in Dagze County, among which, the Wangguo Festival（望果节）and Horse Racing Festival are grandest and most popular. Wangguo Festival and Activities in Dagze County The Wangguo Festival（望果节）, which has a history of more than 1500 years, is widely popular in the rural areas of Tibet. Every July to August in Tibetan Calendar, before people preparing harvest, Tibetan farmers in festival costumes, holding Qiema(grain bucket)切玛 which symbolizes a golden harvest, and highland barley wine, sing and dance in the farmland, [...]

Here are some travel tips we listed for the visitors so that the visitors can have an unforgettable and amazing trip in Dagze County. Best Travel Time：June to August. Travailing during the time, visitors can avoid the cold winter and rainy season come to Dagze County, in the prayer flags fly to seek inner peace and detachment. Suggested Travel Days: 1 day Taboos Deep into Tibetan areas, visitors should respect the faith and living habits of ethnic minorities. No Shouting at temples and Tibetan homes. Some temples and religious sites are banned from taking photos. Some old people also don't like taking photos, which should be respected as much as possible. [...]

To give the visitors a better trip in Dagze County, we list some related maps about the county, including Dagze County Maps, Dagze Tourist Maps, Dagze City Map, and Dagze Location Map. [...]

There are some excellent accommodation in Dagze County to provide visitors a comfortable place to have dinner or rest. Here, we list some of the hotels and hostel to you. Dagze Yulong Shanzhuang（达孜钰龙山庄）  is located in Dagze Deqing Middle Road（达孜德庆中路）with the beautiful and comfortable surrounding environment, superior location, and fresh air . Dagze Sunshine Hostel（达孜阳光招待所） is located in Deqing Middle Road of Dagze County, Lhasa city, Tibet autonomous region. It has a superior geographical location, convenient transportation and special snacks around it. [...]