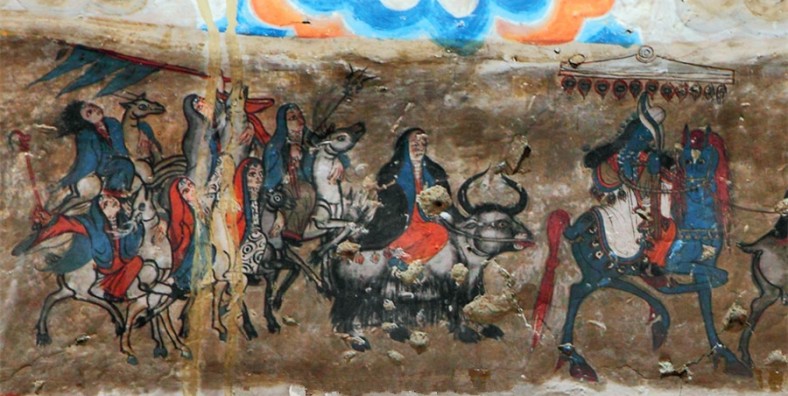 Donkar and Piyang Grottoes is a cave murals site, Donkar and Piyang are the name of two neighboring villages. Donkar, caves with frescoes, was discovered at approximately 40 km northeast of Zanda County during the early 1990s.

Donkar has about 1100 years’ history and the murals in the cave are possibly the oldest in Ali Prefecture. The oldest temple at Donkar is attributed to Princess Lhei Metok, daughter of King Yeshe-O in the 10th century. The most prominent architecture nowadays is Tashi Choling, built for Tsongkapa’s student Ngawang Drakpa in the 15th century. Piyang is around 3 km from Donkar at the far end of the valley. The oldest building in Piyang was the Karsak Lhakhang, attributed to King Yeshe-O. Both Donkar and Piyang have extremely gorgeous paintings.

The cave paintings have much in common stylistically with the Silk Road cave murals of Dunhuang. There are 3 main caves in a side valley before the main village, of which the best preserved is the mandala cave. After visiting here, you will have an interest in early Tibetan and Silk Road art. A couple of kilometers west, the village of Piyang is also worth a visit. It lies at the foot of a large ridge honeycombed with thousands of caves and topped with a ruined monastery and 2 caves with fine murals.

1. Travel to Zanda County, visitors would better start from SHiquan River taking a taxi for about CNY 2000 about 12 hours for convenience, but it’s too expensive.
2. The Shiquan River has a shuttle bus to Zanda, which is normally start at noon every day, but less likely to cancel, the ticket price is 220 ~ 260 yuan, which can be negotiated.

1. Traveling Hours: 1～2 hours
2. Traveling Seasons: All year, and the best time to travel is from  July to September
3.  High Altitude Sickness Avoiding: Bring enough water and some thick clothes, eating more fruits and vegetables rich in vitamins and so on.
4. Pay attention to respect the local customers.
5. Before visiting the caves, you must get the letter of introduction to the caretaker from the Cultural Affairs Bureau in Zanda first.