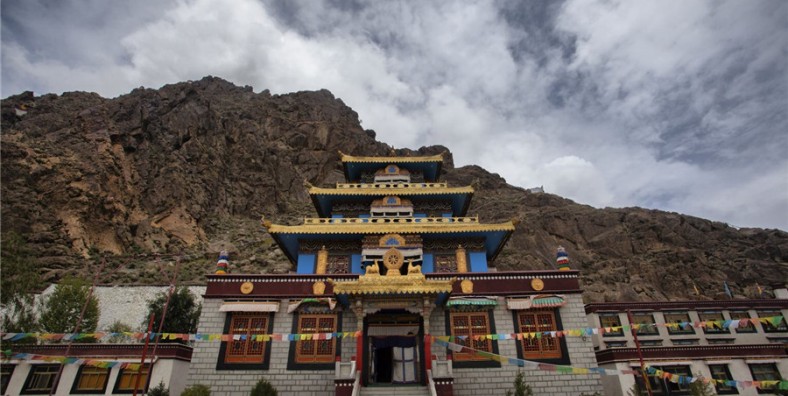 Dorje Drak is also the name of the monastery built to replace it in Shimla, India after the original was destroyed during the Battle of Chamdo. It is now the seat of the throne-holder of the monastery and the tradition. Along with Mindrolling Monastery it is one of the two most important Nyingma monasteries in the region of Tibet.

Dorje Drak Monastery was founded by the First Rigdzin Godemchen Ngodrub Gyeltsen (1337-1409). In 1632 the monastery relocated from Tsang to its present tranquil setting on the north bank of the Brahmaputra, when the young Third Rigdzin Ngagiwangpo and his guardian Jangdak Tashi Topgyel were forced to flee the wrath of the kings of Tsang. Their successor, the erudite Fourth Rigdzin Pema Trinle, greatly enlarged the monastery before his untimely death at the hands of the Dzungar Mongolians, who sacked the monastery in 1717.
Rebuilding began in 1720, under patronage of the 7th Dalai Lama, Kelzang Gyatso. However, when Kelzang Pema Wangchuk, The Fifth Dorje Drak Rigdzin (1719/20-1770/71) was enthroned as the monastery’s third throne holder, its buildings were still lying mostly in ruins.
The Sixth Dorje Drak Rigdzin, Kunzang Gyurme Lhundrub is remembered for “building and maintaining the monastery.” He “gave teachings, commissioned numerous objects of faith, sponsored the printing of scriptures, and emphasized the study of the Jangter and other traditions’ texts.”
Later, during the 1960s the monastery was again obliterated. Nonetheless it has been gradually restored in recent years through the efforts of the present incarnation of Dordrak Rigdzin, who lives in Lhasa, and those of Kelzang Chojor and the local community.
“The monastery specialized in the Northern Treasures tradition of Rigdzin Gödem”. It had approximately 200 monks before the Chinese invasion.

You can learn the culture of t Nyingma and feel the atmosphere of Tibetan culture, Dorjidak Gompa or Tupten Dorjidak Dorjé Drak Éwam Chokgar (r) was one of the Six “Mother” Nyingma Monasteries in Tibet.

Getting to Gonggar County is made easy via the Lhasa Gonggar Airport, located 39 miles from the city of Gonggar and a 40 to 60 minute drive.

1. Traveling Hours: 2~3 hours
2. Traveling Seasons: All year, and the period between March to October is the best time.
3. High Altitude Sickness Avoiding: Bring enough water and some thick clothes, eating more fruits and vegetables rich in vitamins and so on.
4. Pay attention to respect the local customers.