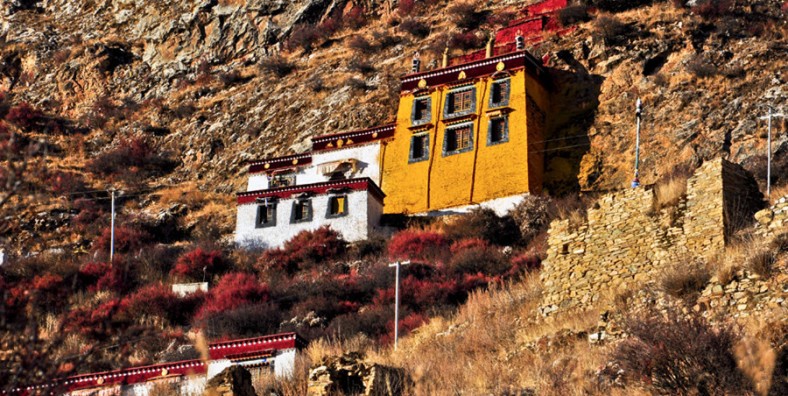 Drak Yerpa is located on a hillside in Dagzê County, the entrance to the Yerpa Valley and consists of a monastery and a number of ancient meditation caves that used to house about 300 monks.
History and Development of Drak Yerpa Monastery
Early years，there are a number of small temples shrines and hermitages and the cliffs contain some of the earliest known meditation sites in Tibet, some dating back to pre-Buddhist times. Among the more famous are those traditionally connected with Songtsen Gampo (604–650 CE), (traditionally the 33rd king of the Yarlung Dynasty （雅鲁藏王朝）and first emperor of a united Tibet). His Tibetan queen, Monza Triucham, founded the Dra Yerpa temple here. He and his two foreign-born queens are said to have meditated in the ‘Peu Marsergyi Temple’ and in the ‘Chogyel Puk’, and to have discovered ‘self-originated’ symbols of the Buddha-body, speech and mind. Padmasambhava（莲花生大师）, or Guru Rinpoche (late 8th to early 9th century), meditated and practiced tantric yoga with his yogini Yeshe Tsogyal here, and to have spent 7 months in meditation in the ‘Dawa Puk’, which is considered to be one of his three most important places of attainment. After Lhalung Pelgyi Dorje（拉垅贝吉多杰） assassinated the anti-Buddhist Bon Emperor Langdarma in 842 A.D, he is said to have hidden himself in a cave and meditated for 22 years. His hat was kept there until 1959.
Main Attractions-Yerpa Valley
Drak Yerpa is the entrance to the Yerpa Valley, from there, it is near by the famous ancient meditation caves in the spectacular limestone cliffs of the Yerpa Valley. There is an ancient sky burial site opposite the main caves. The famous legendary hero Gesar of Ling is said to have visited the valley. The holes his arrows left in the cliffs are believed to be evidence of his presence.
Attraction Transportation
Lhasa shares convenient transportation, so you can fly to Lhasa Kongga International Airport （拉萨贡嘎国际机场）and then take the airport bus or drive by yourself to the temple, the whole journey is about 76 km.
Attraction Travel Tips
1. Traveling Hours: 1 ～2hours
2. Traveling Seasons: All year3.  High Altitude Sickness Avoiding: Bring enough water and some thick clothes, eating more fruits and vegetables rich in vitamins and so on.
4. Respecting the beliefs of local people.