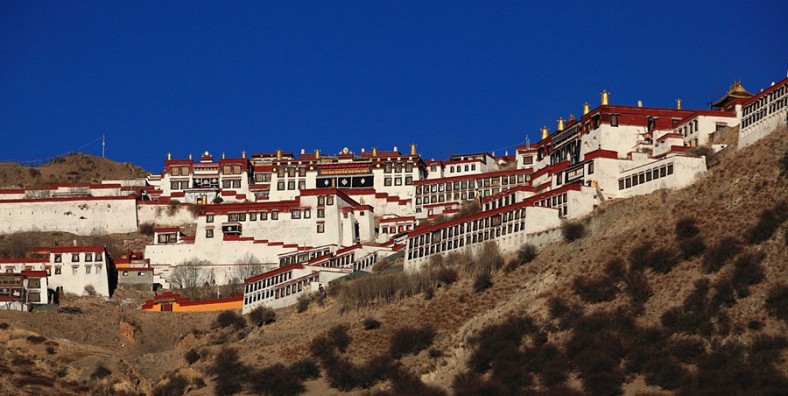 Ganden Monastery (also Gaden or Gandain) or Ganden Namgyeling is one of the “great three” Gelug university monasteries of Tibet, China. It is in Dagzê County, Lhasa. The other two are Sera Monastery and Drepung Monastery. Ganden Monastery was founded in 1409 by Je Tsongkhapa Lozang-dragpa, founder of the Gelug order. The monastery was destroyed after 1959, but has since been partially rebuilt. Another monastery with the same name and tradition was established in Southern India in 1966 by Tibetan exiles.
Ganden is 40 kilometers away from northeast of Lhasa.The monastery lies in a hilly natural amphitheater. There are dramatic views over the valleys that surround it. Ganden Monastery is at the top of Wangbur Mountain, Dagzê County with an altitude of 4,300 meters. Its full name is Ganden Namgyal Ling, which Ganden means “joyful” and is the Tibetan name for Tuṣita, the heaven where the Bodhisattva Maitreya is said to reside. Namgyal Ling means “victorious temple”.

Ganden Monastery was founded by Je Tsongkhapa Lozang-dragpa (1357–1419) in 1409.Tsongkhapa built Ganden’s main temple, with large statues and three-dimensional mandalas. He often stayed at Ganden, and died there in 1419.Tsongkhapa’s preserved body was entombed at Ganden by his disciples in a silver and gold encrusted tomb.

The name “Gelug” is an abbreviation of “Ganden Lug”, meaning “Ganden Tradition”. The Ganden Tripa or “throne-holder of Ganden” is the head of the Gelug school. Before dying Tsongkhapa gave his robe and staff to the first Ganden Tripa, Gyeltsabjey (1364-1432), who was succeeded by Kaydrubjey. The term of office is seven years, and by 2003 there had been 99 Ganden Tripas. The monastery was divided into four colleges at the time of the 2nd Ganden Tripa. Later these were consolidated in two, Jangtsey and Shartsey, located respectively to the north and east of the main temple. Both combine the study of sutra and tantra. Study methods include memorization, logic and debate. The colleges grant degrees for different levels of achievement, evaluated by examination and formal public debate.

In the 1960s,  a meeting called “the great Ganden Monastery, Drepung Monastery, and the government officials” was organized by Shatra, a lay aristocrat. The existing regent was deposed by this assembly and replaced by Shatra. From then on the assembly, or Tsondu, chose the regents and played a significant political role as a consultative body.The monasteries of Ganden, Sera and Drepung was so great that they could in effect veto government decisions with which they disagreed.[8] These three monasteries had 20,000 monks in total, supported by large estates of fertile land worked by serfs.At one time the Genden monastery could support over 5,000 monks. Laurence Waddell reports an estimate of about 3,300 in the 1890. There were apparently only 2,000 monks in 1959.

Ganden Monastery was completely destroyed during the rebellion of 1959. In 1966 it was severely shelled by Red Guard artillery, and monks had to dismantle the remains. The buildings were reduced to rubble using dynamite during the Cultural Revolution (1966–76). Most of Tsongkhapa’s mummified body was burned, but his skull and some ashes were saved from the fire by Bomi Rinpoche, the monk who had been forced to carry the body to the fire.

Re-building has continued since 1980. Early in 1996, after a ban had been imposed on pictures of the Dalai Lama, 400 monks at Ganden rioted. They were fired upon by PLA troops, apparently causing two deaths and several injuries, followed by the arrest of one hundred monks. As of 2012 there were about 400 monks, and rapid progress was being made on rebuilding the monastery.The red-painted lhakang in the centre is the reconstruction of Ganden’s sanctum sanctorum containing Tsongkapa’s reliquary chorten called the Tongwa Donden, “Meaningful to Behold.”

Structures of it
Ganden contained more than two dozen major chapels with large Buddha statues. The largest chapel was capable of seating 3,500 monks. Tenzin Gyatso, the 14th Dalai Lama (born 1935), took his final degree examination in Ganden in 1958 and he claims to feel a particularly close connection with Tsongkhapa. The monastery runs a guesthouse for visitors. Ganden’s main assembly hall is a white building with gold-capped roofs, near a huge square. The main chapel contains many gilded images of Tsongkhapa. A maroon and ochre chapel beside the main assembly hall has a statue of Sakyamuni Buddha, and has a section used for hand-printing scriptural texts using wood blocks.

The three main sights in the Ganden Monastery are the Serdung, which contains the tomb of Tsongkhapa, the Tsokchen Assembly Hall and the Ngam Cho Khang the chapel where Tsongkhapa traditionally taught. The monastery houses artifacts that belonged to Tsongkhapa.

In 2008, over 500 monks, who refused to adhere to the ban against the protective deity Dorje Shugden, enforced by the Dalai Lama’s government in exile, were expelled from the Ganden Monastery in Mundgod, Karnataka, and founded in its immediate neighborhood the Shar Gaden Monastery, officially opened in October 2009. As a result, the Dokhang Khangtsen, the biggest division of Gaden Shartse Monastery, where most of the departing monks came from, ceased to exist.

Dagze  County Transportation
You can choose either self-driving traveling or take public transportation. According to your beginning place, there may be different ways to go to Dagze County.
You can reach Lhasa by air or train. Then take a bus to Dagze County.