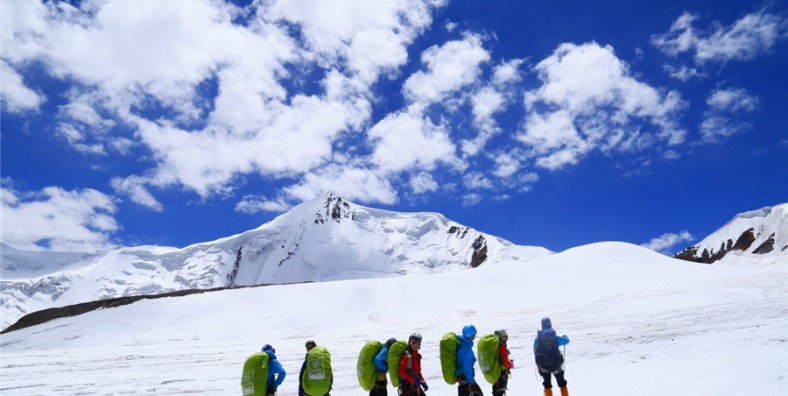 Geladaindong Peak is a snow-covered mountain (or massif) located in southwestern Qinghai province(青海省) of China near the border of Tibet. It is the tallest mountain in the Tanggula Mountain Range(唐古拉山脉) of the Tibetan Plateau with an elevation of 6,621 meters (21,722 feet) above sea level. The traditional source of the Yangtze River(扬子江), begins with glaciers on its surface. The Yangtze’s true source, however, lies 325 km away at the head of the Dam Qu.

History and Development of Geladandong Peak

Geladaindong was first climbed by Japanese team in 1985 after three years of trying to obtain a permit. They ascended the peak via the northwest ridge approaching from the northeast.
In 1997 an American team climbed a new route up the northeast face (55–60°). The team consisted of William N. Rom M.D., Dan Luchtel PhD, and Mark Newcomb. Mark Newcomb also pioneered a face solo route on the same expedition. Mark Newcomb was a guide with Exum Guides from Grand Teton National Park.
Although a dangerous peak to climb, Geladaindong is popular among Chinese mountain climbers. In 1994, the Mountaineering Association of Peking University (MAPKU) became the first Chinese climbing team to reach the summit of Geladaindong.

Due to the area’s arid climate, its annual precipitation is only 200 mm (7.9 in). In the high-altitude area of over 5,000 meters (16,404 ft), however, there exists violent local air circulation and its yearly precipitation is several hundred mm more than that in the foothill area. Thus, snow and hailstones frequently fall, presenting conditions for the development of glaciers. The average temperature is −5 °C (23 °F), and the hottest months are from June to August with a temperature of over 20 °C (68 °F), while the coldest month is January, with a temperature of −18 °C (−0.4 °F). In the high-altitude area of over 5,000 m (16,404 ft), it remains cold all year round, the lowest temperature being less than −30 °C (−22 °F).
The mountain serves as a shelter for more than twenty kinds of wild animals, including the white-lipped deer, Asiatic wild ass, snow leopard, and alpine snowcock.

You can reach Amdo by train, plane or bus. We will provide you with a comprehensive guide to Amdo, giving you a perfect travel service at your leisure.

1. Traveling Hours: 1 day
2. Traveling Seasons: All year
3.  High Altitude Sickness Avoiding: Bring enough water and some thick clothes, eating more fruits and vegetables rich in vitamins and so on.
4. If you happen to come across some wild animals and migrant birds, please do not try to capture or hunt them.