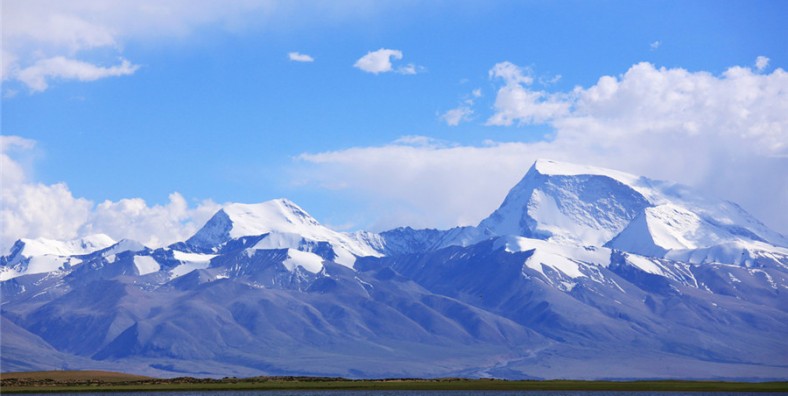 Gurla Mandhata, or Naimona’nyi or Memo Nani(納木那尼峰) is the highest peak of the Nalakankar Himal, a small subrange of the Himalaya. It lies in Burang County of the Ngari Prefecture in the Tibet Autonomous Region of China, near the northwest corner of Nepal. It is the 34th highest peak in the world (using a 500-meter prominence cutoff). It is also notable for being well within the Tibetan Plateau (most peaks of similar height – except notably Shishapangma, the world’s 14th highest peak – lie nearer to or outside the edge of the Plateau) and relatively far away from other peaks of height greater than 7500 metres. It sits roughly across Lake Manasarowar from the sacred peak of Mount Kailash.

In 1905 T. G. Longstaff, accompanied by two alpine guides and six porters, made an attempt on Gurla Mandhata. They turned back at around 7,000 m (23,000 ft) after being caught in an avalanche and encountering other difficulties.This was a strong achievement for the time, especially for such a small group; at that time no summit of over 7,000 m had yet been climbed and Longstaff’s height represented a world altitude record.

The first ascent of the peak was by a joint Japanese/Chinese team led by Katsutoshi Hirabayashi, via the north side of the peak, in May 1985. Since that time, there have been six additional successful ascents and two failed attempts on the peak.

In 1997, an attempt was made to ascend the peak via the then-unclimbed North Face route by Quinn Simons, Soren Peters, and their guide, Charlie Fowler. The team made a valiant effort, climbing high on the mountain, but after severe storms and other difficulties had to retreat. Their descent ended in a fall of some 450 m (1,500 ft) down the North Face of the peak. Fowler was slightly injured, while Simons and Peters both suffered extreme frostbite on their extremities.