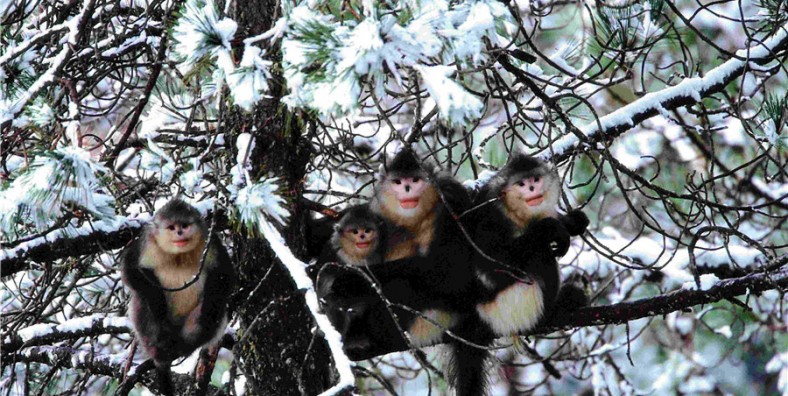 Tibet Markham Nature Reserve for Yunnan Golden Monkey（芒康滇金丝猴国家级自然保护区）, formerly known as Honglashan Nature Reserve（红拉山自然保护区）, is located in Markam County（芒康县）, Chamdo Prefecture（昌都市）, Tibet Autonomous Region, 60 kilometers away from the county seat, which is 2300 ~ 4400 meters above sea level. It is the second rhinopithecus bieti（滇金丝猴）national nature reserve in China, and also one of the most important distribution area of China’s Yunnan golden monkey, where has already discovered the world’s endangered rare primates rhinopithecus bieti with the population of more than 700 (2013). The main protection objects are the conservation of endangered animals and their ecosystems, such as the Yunnan golden monkey, the hazel hazel hen with spot-tail（斑尾榛鸡）, the Malay bear（马来熊）, and Chinese monal（绿尾虹雉）.

Markham Nature Reserve for Yunnan Golden Monkey is one of the most diverse and typical areas of China’s mountain biodiversity and is a natural reserve of wild fauna and flora. The landscape here is really spectacular, with natural scenery such as snow mountains, forests, canyons, mountains and deep valleys. The terrain of the protection zone is steep, but because the Tibetan highway runs through it, it is a protected area with relatively convenient transportation condition in Tibet.

Markham Nature Reserve for Yunnan Golden Monkey shows the obviously vertical perpendicular band of the plants and nature landscape, where there are unique ecosystems. It is a rare natural reserve in China with the low latitudes and high-altitude, and one of China’s high-plateau forest regions with precious biodiversity species gene pool. It has high value of natural protection and scientific research.

The Sichuan-Tibet National Highway 318 and Yunnan-Tibet National Highway 214 converge in Mangkam County, and there are many stops on long-distance coach routes at both Mangkam and Yanjing. Transportation to the area is convenient but it’s a long journey, and a bumpy road. Hitchhiking is common in Tibet, but at a negotiated price. It is possible, but rare, to rent a car for around RMB 2.5 to 5 per km. There are about two flights to Bangda from Chengdu and Lhasa every week, depending on the (changeable) weather.