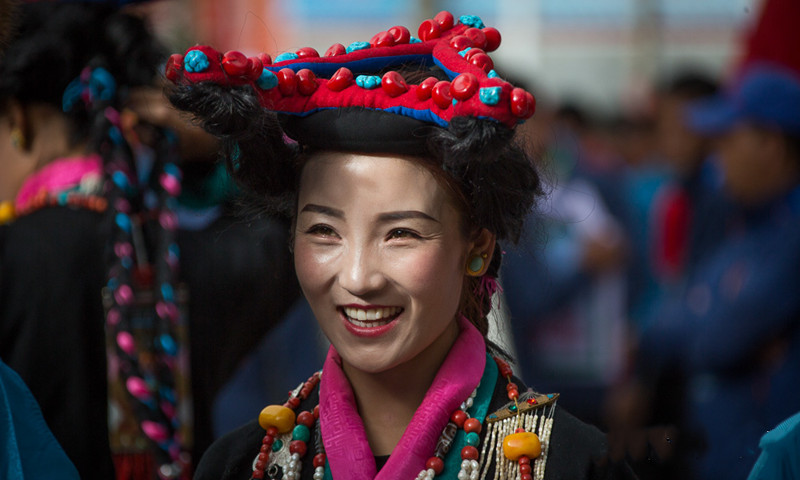 Fragrance-filled smoke permeates the air as you approach a village in the middle of a valley in the Tibet autonomous region.

The village, Thonda, which is in the Thonba township of Nyemo county and is alongside the Yarlung Zangpo River, is renowned for its 1,300-year history of incense production.

Most families in the village are somehow involved in the production and sale of incense. The village has two companies and one cooperative engaged in the trade.

The village, which has a population of around 1,100, also has a close connection with the Thonchu, a stream that runs through it. Locals have put mills in the middle of the stream for grounding pieces from the trunks of juniper trees into powder, an essential ingredient in the making of incense.

According to local legend, Thonmi Sambodha – a minister of Tibetan King Songtsen Gampo in the early seventh century, and who is regarded as the inventor of the Tibetan script and a pioneer of Tibetan incense production – drove all the living creatures from the Thonchu stream and into the Yarlung Zongpo River, and then encouraged the locals to make incense.

That, according to legend, is how incense production replaced fishing as an occupation in the village. Locals believed the setting up of mills in a stream with no living creatures conformed with the principle of nonviolence.

Sonam Norbu, a 72-year-old villager, said he has spent a lifetime making incense. He picked up the skills starting at the age of 10. He said his father “was respected by all villagers as an outstanding incense producer. I learned the skills as part of our tradition.”

Sonam, who mainly helps to collect materials from the high mountains, has imparted his skills to family members. “My son has spent some 20 years and my daughter-in-law 13 years in the business,” he said. “The tradition will pass on to the next generation. I am very proud of them.”

Like most people in the village, Sonam and his family do not get much income from farming and herding. But incense production brought 30,000 yuan ($4,190) in income to the family last year.

Earlier, the villagers had to travel all the way to Lhasa, the regional capital, which is about 150 kilometers away, as well as to other provinces, to sell the incense.

But now, Sonam said, “Thanks to the overall social development, our village is quite well-known. We also receive orders at our doorstep.”

Chamba Trinley, 20, a fellow villager, is also involved in the incense trade. “I am engaged in incense production individually as well as through the cooperative,” he said, adding that 35 families are part of the cooperative, which has “helped to broaden our market”.

“Companies from Lhasa and other provinces purchase the products from our cooperative,” said Chamba. This year, his cooperative received an order worth 1 million yuan from a company in Lhasa.

Five members of Chamba’s family, including his father, are engaged in the incense trade.

According to Tasang, a staff member of the culture and tourism center in the village, the villagers have been relying on incense as their man source of income for more than 1,300 years.

Tasang said that with tourism and transportation development, the village’s situation has improved, since villagers can sell their products in their home as well as through the cooperative, now that the village has become a tourism destination.

A few successful businessmen in the village lead the whole village in the business. Villagers from impoverished families get jobs in incense production and sell incense to local incense companies.

They also have been trying to turn their business into a global venture.

Gyatso, who was born in the village and is a fourth-generation incense producer, is owner of one of the village’s two incense companies. He has been engaged in incense production for more than 35 years, and was employed by the county government as a production guide for the county’s incense training program between 1994 and 1998.

Gyatso learned the skills of incense production, which he said involves around 30 procedures, as a child from his father, became an outstanding incense maker, and is skilled at finding new herbs to use as incense ingredients.

“Unlike most villagers who produce one or two kinds of incense based on traditional methods, I have found six new herbs as newly discovered incense elements, and altogether, I produce six different incense products,” said Gyatso.

In 2008, he established his company, which has provided job opportunities for impoverished families in the village.

“Now my company has 28 employees from the village, six of whom are from impoverished families,” said Gyatso. “Establishing a company is not only for my own interests – it is also for all the villagers.”