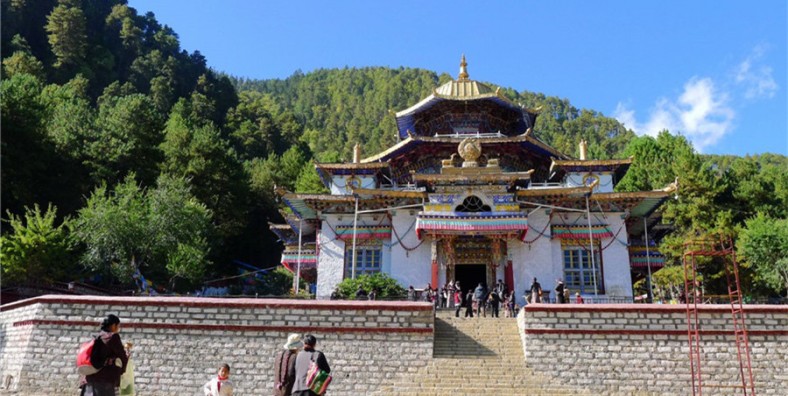 Lamaling Monastery also known as Zangdrok Pelri Monastery (桑多白日, Sangzhog Bairi) and Burqug Lamaling (布久喇嘛林寺), is a Buddhist monastery located near the village of Jianqie (简切村), Burqug Township, Bayi District (former Nyingchi County), in Tibet, on a small hill 1.5 km south of Buchu Monastery. The monastery belongs to the Nyingmapa sect, translated as the ‘Ancient Ones’; their lineages go back to the first infusion of Buddhism from India to Tibet in the 7th century AD. The Nyingma sect incorporated many of the traditions of the native Tibetan Bon religion, which respects nature and local nature spirits.

History and Development of Lamaling Monastery

The ancient monastery built in the 7th century (said to have been built in the Zangdok Pelri style) was destroyed in an earthquake in 1930. It was rebuilt as a small monastery on flat land below the ruined monastery in the 1930s. At that time, it was the seat of late Dudjom Rinpoche (1904–1987), who was chosen as the head of Nyingma school during his later exile to India, after Tibet came under control of the Chinese as an Autonomous Region of the People’s Republic of China. The location of the monastery is also credited to an event that marked the religious contest between Buddhism and Bon religion.

Subsequent to the old monastery’s destruction, a smaller temple (20 square kilometers) was built below the old location on flat land. A legend narrated about this event purported a propitious omen of the ‘Life supporting’ stone (lado) of Buchu moving. Further, when the then Rinpoche performed the consecration ceremonies for the small temple, he is stated to have seen a three horned goat circling round the area and vanishing into a stone. This stone is still preserved in front of the ruined temple. In the 1960s, the small temple was destroyed and Guru Rinpoche’s son, Dorje Pasang, was killed. The Lamaling Monastery, as rebuilt in 1989, is said to be one of the largest and most important Tibetan Buddhist monasteries in Nyingchi County.

In 1989, the late Dudjom Rinpoche’s daughter Semo Dechen and her husband Lama Chonyi Rinpoche started the restoration works and built the present exquisite Zengdok Pelri Monastery (temple) with an extensive garden complex surrounding it. Constructed on the hill side, it is approachable by a motorable road from the valley below.

The Nyingma Sect had imbibed the traditions of the native Bon religion, particularly in relation to nature, and believed that everything had a spirit. Phallic worship and sacrifices to this symbol were also a part of their traditional practices. The monastery is now being looked after by Guru Rinpoche’s son Chuni Rinpoche, along with several monks.

The new monastery is in an octagonal shape, has a height of about 20 meters and depicts a prominent gilded pagoda at the apex. It is a four-storied monument. The monastery is built with wood, with eaves (the eaves at the lower level depict twenty angles and those on the second and the third floors have an octagonal shape) in a curvature with radiantly painted beams. It is a fusion of Han and Tibetan artistic and architectural styles. The entire frontage is adorned with long strings of wooden prayer beads. In the main prayer hall, there is a kora and four protector chapels in each corner. The extant original image of Mehotara Heruka from the old monastery and foot print of the Padmasambhava are preserved in the restored monastery. The chapels have sculptures of Amitaba (Opagme), Avalokiteshwara (Chenresig) and Vajrapani (Chana Dorje). The top floor chapel also has a four-armed Avalokiteshwara (Chenresig) and two statues of Manjushri (Jampelyang). The new images in the various halls of the monastery are made from the best metal casting tradition of artisans from Chamdo. In the adjoining building, to the right of the main monastery, religious services are held on 10th, 15th and 25th day of each lunar month. The hall contains a large main statue of Sakyamuni (Sakya Thukpa). Pilgrims circumambulate around this building and the main temple as part of the Kora ritual. The four external walls are painted in white, blue, red and green against a backdrop of the golden dragon-shaped upturned eaves.

In 1987, a Dorje Trole stupa was built to the west of the old ruined temple. In the grassy courtyard in front of the monastery, a few mountain goats brought here from Tsodzong Monastery can also be seen.

The ruins of the original monastery can be seen on the hill side, and a trek of about 45 minutes leads to them. A small chapel here has a statue of Dorje Julut and an old photo of Rinpoche. A foot print of Sakyamuni is also seen above the door.

One particular unusual feature in the monastery is at the entrance gate of the monastery, where two large wooden male and female genitalia are seen, beside two stone lions. This is said to be a Bon religious practice of worship of nature in monasteries of Tibetan Buddhism, particularly of the Nyingmapa sect. It is a sight professing to drive off evil spirits. Another unique aspect of this monastery is that both nuns and monks recite the Tibetan scriptures together in the main prayer hall.

Nyingchi Mainling Airport (林芝米林机场 – LZY) is located in the Yarlung Zangbo River Valley – the largest canyon in the world. With an altitude of only 2,949 meters (9,675 feet), Nyingchi Mainling Airport is the lowest airport in Tibet but it is the most challenging airport for flight operation. Directly connected with Chengdu, Chongqing, Lhasa, Guangzhou and Xian, usually Nyingchi is recommended as the earlier destination than any cities in Tibet due to its lower altitude and higher oxygen level.

The airport is about 50km to Bayi Town, Nyingchi downtown area and 18km from Mainling County. There are available taxis which cost about 150 CNY from Nyingchi Airport to Bayi Town. And shuttle buses starting from Mainling County to the airport is at 7:20 and 7:40 in the morning, costing about 25CNY in 0.5 hour. Tibet Discovery also provides you convenient and comfortable airport pick-up and drop-off services included in our Tibet tour packages.

Travel to Bayi By Land

If you rent a car or choose arranged car service of TibetDiscovery Tour Packages, firstly, drive from Lhasa on the Lhasa – Nyingchi Hwy, you will cross the Mila Pass (5013m), which lies in the boundary between Maizhokunggar County in Lhasa and Gongbo’gyamda in Nyingchi. Then continue driving to Nyingchi City on China National Hwy G318 with the Basumtso Lake in the west way. Later you will arrive in Bayi Town of Nyingchi City, Bayi District, where most hotels are assembled. You can settle down in booked hotel to have a rest for upcoming tour in Nyingchi.

Very few tourists go to Nyingchi passing this route for its long and dangerous traffic situation. Shuttle buses between Shannan and Nang County, Nang County and Bayi are irregular based on weather, road condition as well as number of passengers.

Maybe you just finish your Shigatse Tour and want to explore a total different Tibet scenery, Nyingchi is exactly what you are looking for. Since there is no direct coach heading to distant Nyingchi from Shigatse, tourists need a stopover in Lhasa or Shannan area to transfer. The north Shigatse – Lhasa – Nyingchi way is much more popular and easier than south route through Shannan. But attention that both routes take more than ten hours totally, you can visit some attractions along your course to make the long journey more interesting.