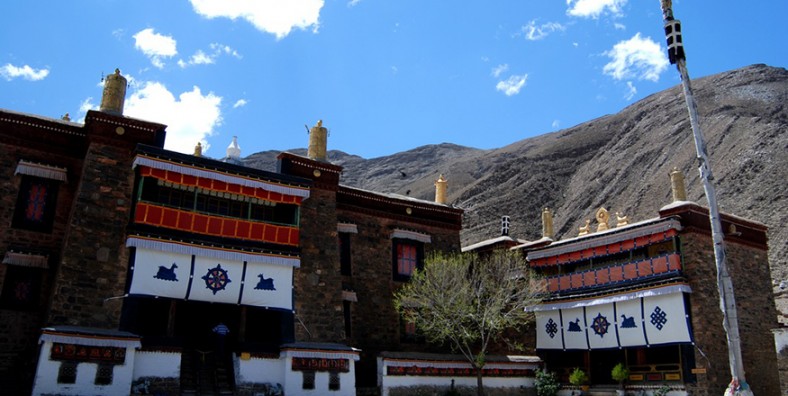 Mindrolling Monastery is one of the six major monasteries of the Nyingma school in Tibet. It was founded by Rigzin Terdak Lingpa in 1676. Tendrak Lingpa’s lineage is known as the Nyo lineage. The name in Tibetan means “Place of Perfect Emancipation”.

History and Development of Mindroling Monastery

Mindrolling was heavily damaged in 1718 by the Dzungar Mongols from East Turkistan. It was rebuilt during the reign of the Seventh Dalai Lama (1708–1757). Dungsay Rinchen-namgyel and Jetsunma Mingyur Paldron, the son and daughter of Terdak Lingpa, supervised its reconstruction. For nearly 300 years its monastic university trained Nyingma scholars and yogis from all over Tibet.
At the time of the 1959 revolt against Chinese Communist rule in Central Tibet, there were approximately 300 monks at Mindrolling. In the years after 1959, the monastery again suffered damage to its buildings, but it was not as severe as at other monasteries such as Ganden. At present, the monastery is still being reconstructed in Tibet.

Mindroling Monaster is the sixth batch of national key cultural relics protection units. At Mindrolling, special emphasis was placed on the learning of Buddhist scriptures, astronomy, Tibetan lunar calendar, calligraphy, rhetoric, and Traditional Tibetan medicine. Monks traditionally studied thirteen major sutra and tantra texts of the Nyingma, and learned the practices stemming from various terma, especially from the lineage of Terdak Lingpa. The monastery had at one time, over one hundred satellites and its throne holder was one of the most revered in Tibet.

Tourist can travel to Lhasa by air to Lhasa Kongga International Airport(拉萨贡嘎国际机场）or train firstly and then transfer to Lhoka by long-distance bus, which is the major choice.

Attraction Travel Tips
1. Traveling Hours: 1~2 hours
2. Traveling Seasons: All year, and the period between March to October is the best time.
3. High Altitude Sickness Avoiding: Bring enough water and some thick clothes, eating more fruits and vegetables rich in vitamins and so on.
4. Pay attention to respect the local customers in the monastery.