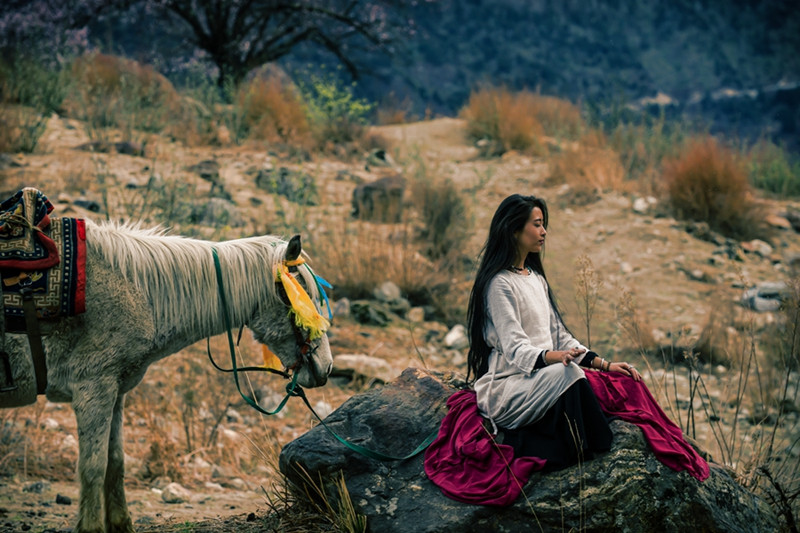 Yunggie Ma, whose music is inspired by Monba folk culture, is set to perform at the Stallion World Music Festival, Chen Nan reports.

When Yunggie Ma entered the room, she immediately made an impression on the audience. It might have been her waist-long hair or her bohemian dress. When she started to sing, people applauded her powerful voice. The soft-spoken 33-year-old ethnic Monba singer asked them: “What did you see through my chanting?”

“I saw tropical rainforest,” said an audience member. “I saw mountains,” replied another.

“I am glad that the melody took you on different journeys,” Yunggie Ma replied. She was performing in Chengdu, Sichuan province, and announced her upcoming shows, set to take place there and in Shanghai.

Entitled Lotus Secret Concert, the shows are part of the Stallion World Music Festival, which will be held in the two cities over Sept 13-15, featuring Spanish singer-songwriter Ana Alcaide, a 13-piece Japanese orchestra, Turtle Island, and a Grammy-winning band from France called Deep Forest.

Yunggie Ma now lives in Shanghai. She was born in Nyingchi in the Tibet autonomous region. Her music is inspired by folk stories of the Monba ethnic group. Many of her songs are dedicated to her hometown. During the shows this month, she will rearrange old hits as well as perform new songs adapted from Monba folk music.

“Most of the Monba folk stories and songs are related to the Monba migration story dating back about 400 years and the ethnic group’s connection with nature,” she says.

“My roots are the source of my inspiration.”

Yunggie Ma left her hometown in 2005 to study film and theater at the Communication University of China in Beijing. The Monba influence in her life continued. In 2010, after the Galongla Tunnel, a difficult part of the Medog highway project in Tibet, was completed, she traveled to Medog county, which is under the administration of Nyingchi city, to learn more about her community.

With a population of around 10,000, mostly made up of the Monba and Lhoba ethnic groups, Medog is located on the southern slope of the Himalayas.

In 2013, the highway opened to traffic, linking the outside world with the remote county.

“My grandparents told me a lot of stories about the Monba people-this has been like a seed growing in my heart,” she says, adding that she often listens to folk songs sung by her grandmother that she had recorded using her phone.

During a trip to Medog, she learned that the county’s other name, Baimagang, means “a hidden lotus flower”, which is mysterious and isolated from the outside world. Inspired by such journeys, Yunggie Ma released her debut album, Lament for the World of Suffering: The Sacred Land of the Lotus, in 2016.

All six songs are performed in the Monba language, which she learned as a child from her grandparents.

Elegy, for example, is a song about some young geese crying for their dead mother. The pilgrims passing by are touched by their plight and begin to chant hymns. Get Together is a song that her grandmother sang before family reunion dinners.

“When you listen to her songs, you can ‘see’ the blue sky, high mountains and animals living in her hometown. With her music, you can also explore the mysterious world of the Monba people,” says Song Yuzhe, a self-taught musician who blends traditional Chinese and contemporary music.

In 2009, Yunggie Ma joined Dawanggang, a Beijing band founded by Song. After three years with the band, she left to discover more about herself, Monba music and her ancestors’ history.

Yunggie Ma made her first breakthrough after performing on reality TV shows, such as CCTV’s Youth Singer Competition and Chinese Idol, a local version of the American and British shows.

Despite her popularity, Yunggie Ma withdrew from the limelight. In 2014, she gave birth to a girl. She wrote a song, Let’s Fly in the Water, as a gift to her daughter when she turned 1 year old. While she now lives in Shanghai, Yunggie Ma visits her remote hometown every year along with her daughter.

“My voice is a gift from my ancestors. They have given me faith and energy.”