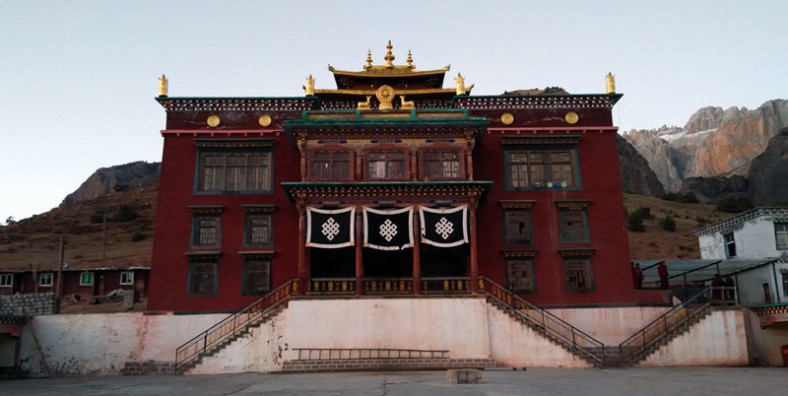 Naidan Monastery（乃旦寺）is located on the mountain which is about 200 meters away from Wuru Village（乌入村）, Yuzha Township（雨扎乡）, Riwoqe County, Chamdo Prefecture, Tibet Autonomous Region. The climate here is mild and the land fertile. The monastery is surrounded by green trees and Jiqu River（吉曲河）with a pleasant view. Duozong Mountain（多宗山）in the north looks just like sixteen arhats, hence gets the name of Naidan Monastery which means arhat hall in Tibet language. Founded in 1820 AD, the monastery is more than a hundred years old now. Naidan monastery has a unique artistic style, which provides valuable historical information for the research of the development of the latter Nyingma sect（宁玛派）.

The Massive Structure of Naidan Monastery

Naidan Monastery（乃旦寺）consists of the Buddha hall, the guarding hall and Weibao assembly hall. It is a two-story Tibetan flat-topped building. The ground floor is the Buddhist hall, which is about 45.3 square meters. There are four pillars, the door faces south. Outside the door is a Ming gallery, and the rear wall of the Ming corridor is sometimes painted by the kalacakra（时轮金刚） and the four heavenly kings mural. In the west of the Buddhist hall, there are niches in the west of the temple, each of which is of different sizes. It has been used for the Buddha statue and the clay statue of the Nyingma family. In the north of the hall is a two-story building, with a kitchen, a warehouse, and a Buddhist monk. There are 14 rooms, including one for the classic room, with a set of Kangyur （《甘珠尔》）and Tengyur（《丹珠尔》）.