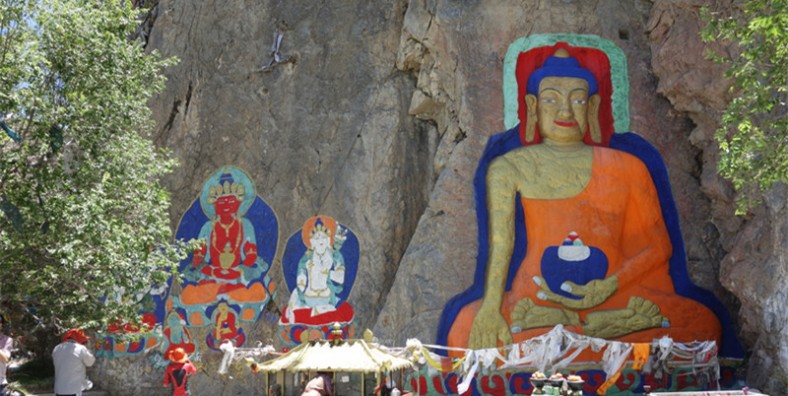 Nietang Temple is located at the north foot of Nietang Mountain in Quxu County, about 20 km (12.4 miles) southwest of Lhasa city. Being the biggest stone statue engraved on a cliff in Tibet, it is the first attraction to welcome visitors to Lhasa. Tourists who enter Tibet from Gonggar Airport will pass the statue on their way to downtown Lhasa and almost every passenger wants to get off the bus to get closer to it and take a photo as a souvenir. It can also be reached by taking a taxi from Lhasa.

The Buddha statue on it is one of Sakyamuni sitting under a Bodhi tree to capture evil. The statue is 8 meters (about 26 feet) in width and 9.8 meters (around 32 feet) in height including the base around 1.3 meters (4.27 feet). The hand of the Buddha is 1.4 meters (about 4.6 feet) long and its leg is about 1.9 meters (about 6.2 feet) long. Around the statue, many pieces of hada can be seen. The hada is a long white scarf, symbolizing the giver’s sincere heart to other people. Of the many hadas around the statue are those presented by the visitors and the worshippers to show their respect to the Buddha. Due to the large size of the statue, these hadas are thrown upon the cliff. It is said that the higher you throw, the better it is.

With its striking color it can be seen clearly several miles away. While taking a closer look at it, it may feel mysterious, or even that you are in the world of Buddha. With moderate proportions and bold and unconstrained lines, this stone inscription not only perfectly shows the stone’s quality and the exquisite engraving skill, but also makes the statue vivid and lifelike. If you want to go there to take photographs, the morning is the best time. In the afternoon, the whole statue is covered in the shadow due to the backlighting.

Mt. Nietang
Mt. NietangA legend about this statue is spreading widely among the locals. More than 700 years ago, a famous Buddhist Basiba went back to Sakya Monastery from Beijing, taking a statue of Buddha with him. When passing Nietang area, the statue suddenly said that he intended to stay here to propagate Buddhism. Immediately Basiba ordered to build a temple and made a Buddha statue, which was later become the Nietang Buddha.

The construction of this statue has a close relationship with the nearby Nietang Tara Temple. The Tara Temple, playing a vital role in Tibetan Buddhism, is a simple and neat temple on the west side of the statue. In 1046 the famous father of Tibetan Buddhist Attisha was invited to Nietang to take on apprentices and promote Buddhist ideas. In 1054 he passed away. His disciples built the temple and carved Nietang Buddha on the cliff to worship their master. Some of his daily articles and his bone ash were kept here, so up till now, this temple is still a busy place for worshiping and even attracts many Bengalese followers (Bengal is the hometown of Attisha). Relics as well as murals in the temple attract many scholars for research.

Having gone through many ups and downs, this Buddha still maintains his luster and enchantment and receives countless Buddhists and visitors with his mystical smile and majestic appearance.

Attraction Transportation
You can fly to Lhasa Gonggar International Airport(拉萨贡嘎国际机场）and then take the bus to Quxu County. And then you can drive by yourself or follow the leader to get to.