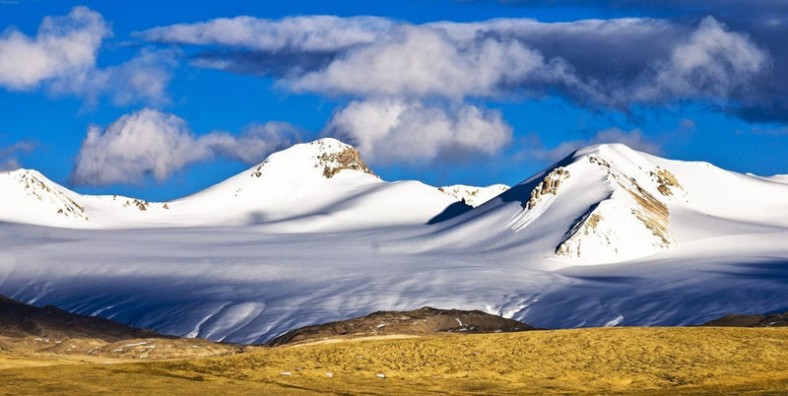 The Nyenchen Tanglha Mountains (official spelling: Nyainqêntanglha Mountains) are a 700-kilometre (430 mi) long mountain range, and subrange of the Transhimalaya System, located in the Tibet region and the Tibet Autonomous Region of China.[1][2]

Geography[edit]
One source says the Nyenchen Tanglha Mountains range is about 1,000 km (620 mi) in length. Its highest point is 7,090 m (23,260 ft) located 100 km (62 mi) to the northwest of Lhasa. The range is parallel to the Himalayas in the Transhimalayas, and north of the Brahmaputra River. [3] Another source says the Nyenchen Tanglha Mountains extend 460 miles (740 km) from Nyêmo County in the west to Ranwu County (the southwestern part of Baxoi County) in the east.

The Nyenchen Tanglha Mountains have an average latitude of 30°30’N and a longitude between 90°E and 97°E. Together with the Mount Kailash range located further west, it forms the Transhimalaya [a] which runs parallel to the Himalayas north of the Yarlung Tsangpo River.

The Drukla Chu river rises in the Nyenchen Tanglha Mountains, where it is called the Song Chu river, and joins the Gyamda Chu river. The combined rivers run about 100 kilometres (62 mi) southeast to the Yarlung Tsangpo river.[7]

Subranges[edit]
The range is divided into two main parts: the West and East Nyenchen Tanglha, with a division at the 5,432 metres (17,822 ft) high Tro La Pass near Lhari Town.

East Nyenchen Tanglha[edit]
East Nyenchen Tanglha, located in Nagqu Prefecture, Chamdo and Nyingchi Prefecture, marks the water divide between the Yarlung Tsangpo to the south and the Nak Chu river (which becomes the Nujiang and Salween in its lower reach) to the north. The rugged and heavily glaciated range counts more than 240 peaks over 6,000 metres (20,000 ft), culminating with Sepu Kangri (6,956 m) which has a 2,213 m topographic prominence and is 166 kilometres (103 mi) away from a higher point.[10]

Large areas of the eastern sector are snow-covered.[11] Two-thirds of the glaciers, accounting for five-sixths of the area, lie in the eastern section. This section receives the southwest monsoons, which enter the Tibetan plateau at the Yarlung Zanbo river’s Grand Bend. The air is forced up by the terrain, and yields the highest rainfall and moistest air of the plateau, which feeds the development of glaciers.[4] There are thirty-two glaciers that are over 10 kilometres (6.2 mi) long. Kyagquen Glacier is the largest, covering 207 square kilometres (80 sq mi) and extending for 35.3 kilometres (21.9 mi).[4] The end of the Qiaqing glacial tongue is at 2,530 metres (8,300 ft) in an area of mountain forests.[12] The glacier foot is at 30.3833°N 94.8329°E. According to the Langzhou Glaciers Research Institute, there are a total of 2,905 glaciers in the range covering a total area of 5,898 square kilometres (2,277 sq mi).

Most of the peaks in East Nyenchen Tanglha, sometimes called the Alps of Tibet, are unclimbed. Sepu Kangri itself was attempted twice by Chris Bonington and Charles Clarke in 1997 and 1998, about which experience Bonington and Clarke wrote the book Tibet’s Secret Mountain: The Triumph of Sepu Kangri (ISBN 0756762308). The summit was finally reached on 2 October 2002 by Mark Newcomb and Carlos Buhler.