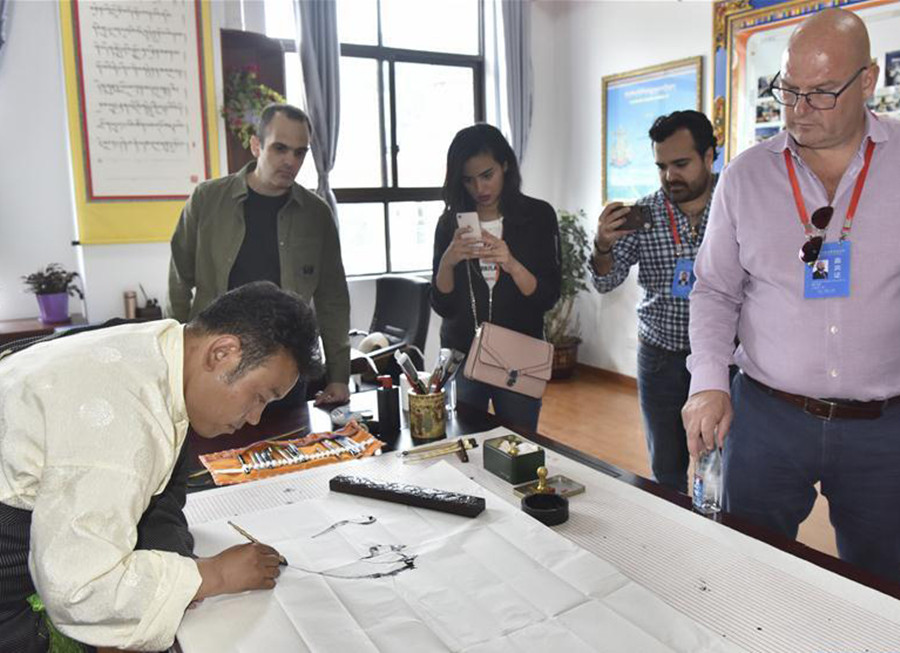 Nearly 30 journalists from Britain, Italy, Switzerland, Argentina and Nepal, and foreign experts working for Chinese media visited Nyingchi in the southeastern part of Tibet Autonomous Region from Monday to Wednesday.

The foreign journalists work for news agencies, tv stations, newspapers, periodicals and other media outlets. Invited by the State Council Information Office and the Tibet regional government, they visited villages, elementary schools and maker-spaces in Nyingchi, and held talks with people from various walks of life.

Elizabeth Mcleod, CEO of Meridian Line Films in Britain, said her company has made a five-part series about Tibet. She said she is particularly interested in learning more about the lives of ordinary people in the region.

During their three-day tour, the delegates observed Tibetan-paper making art and interviewed students and teachers at the Second Elementary School of Nyingchi. They also tried typical Tibetan food such as buttered tea and cheese and talked with local Tibetan entrepreneurs.

Italian journalist Rita Fatiguso, from ILSOle24Ore, has been to Tibet three times. A lot has happened in the past nine years since she first came, she said.

People’s lives have become more affluent, not just in food, but in their social lives as well, she said.

Tibet is located in a challenging geographical environment, but the Chinese government has invested great efforts to make changes, and great progress has been made as a result of huge input into infrastructure, she said.

Tseren Surenjav, former editor-in-chief of the Montsame News Agency in Mongolia, said the reality he sees is rather different from what he read about in books.

He said he has already started collecting first-hand materials so that he can write articles on Tibet for Mongolian readers.