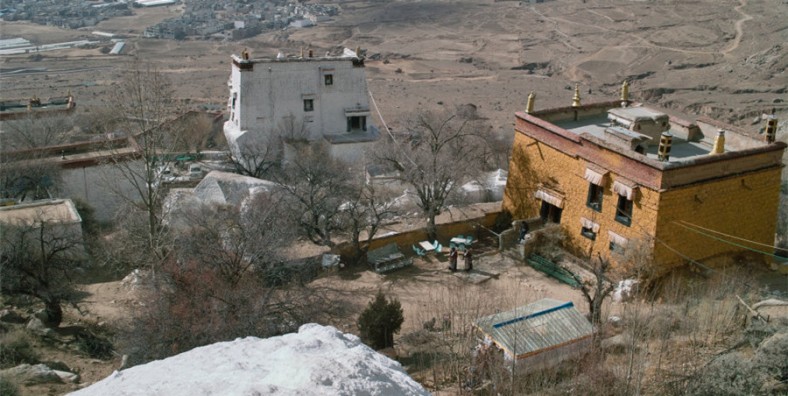 One hour and a half walk from Sera Monastery, Pabonka Monastery is one of the most ancient Buddhist sites in the Lhasa region, Pabonka was built in the the 7th century by King Songtsen Gampo, even before the time when the Jokhang and Ramoche were built. The Tibetan King Trisong Detsen, Guru Rinpoche and Tibet’s first seven Monks all meditated here in different times, and it is said that right here the monk Thonmi Sambhota created the Tibetan Alphabet. Unfortunately, in 841, the anti-buddhist King Langdharma destroyed it. Fortunately, it got rebuilt in 11th century and an extra floor to the two-storey building was added by the fifth Dalai Lama. In Culture Revolution, Pabonka suffered a lot. Until recent years, it has been under repair.

The building is jam-packed with shrines, of which the most famous relic is mantra. The blue and gold carved mantra faces the entrance of the hall which is on the far side. The 1300-year-old “self-arising”(not man-made) carving which depictes Chengresig, Jampelyyang and Chana Dorje- the rigsum Gonpo trinity is the central shrine. By the way, the chapel names after the rigsum Gonpo trinity. It hasn’t been dug out until 1985 since the carved mantra has been buried in the culture revolution.

The significant scenic spot to see is Palden Lhamo Cave. It is famous because Songtsen Gampo has once meditated here. Nowadays the picture of Songtsen Gampo with a turban on his head can be seen. Trisong Detsen and Guru Rinpoche, wives of Songtsen Gampo are also in the cave, and a rock carving of the Palden Lhamo who is a female protector can be seen here. A female tortoise which was sent to Songtsen Gampo lies on the west side of the pabonka rock. If you want to see it, just go straight along the mountain and turn left at the row of chortens.

At the ancient rock, Pabona Potrang cites is the third scenic spot on your way. Outside, a stature of the meditational deity Demchok sits in the comfortable rooftop quarters of the Dalai Lama . Inside, on the ground floor, you can see nothing interesting, but on the second floor, an intimate assembly hall is in front of you, in which behind the right pillar there is a “self-arising” chenresig statue and a picture of the current Pabonka Lama hidden. An ancient conch shell can also be appreciated here because it is covered in a prayer scraf. It is in the inner protector chapel. The next room contains four-pillared Kashima Lhakhang which is in the same line with different lamas, various kings and their wives in the beautiful glass case.

The yellow temple of Princess Wencheng and the remains of 108 chortens lies furture. Princess Wencheng lives in Tang Dynasty and she is the Chinese wife of King Songtsen Gampo. The buildings with two ground floors is devoted to five manifestations of and the medicine Buddha and Tsongkhapa. An image of Thonmi Smabhota, who gets his reputition by inventing the Tibetan Alphbet, stands near the status of Princess Wencheng in the upper-floor chapel. Another wife of Songtse Gampo Bhrikuti, coming from Nepali, is also here. On the other side of the room of Green and white Drolama, the Chinese and Nepali wives are regarded as emanations.
The scenic spots around

Pabonka is treated as a base for further travel to some brave travelers. It takes half a day to get Kora from Pabonka and Tashi Choling hermit-age and chupsang Nenner are also not far away from Pabonka. If you want to go to Sera Monastery, that will be a nice trip. You’d better take some water with you if you want to enjoy it in summer, especially in May.

Tashi Choling Hermitage is a good choice for people who don’t want to walk too long.20 minutes is enough to get Tashi Choling Hermitage from Pabonka. At the hermitage you can have a good view of the beautiful scenery while on the way nothing too much can be seen. Holy spring water attracts piligrims from different places. It comes from the upper chapel before it goes to the hermitage. The electricity poles can lead you here from the back of the Pabonka Koar.

Chupsang Nunnery is a very friendly place with 80 nuns residents. If you want to get here from Tshi Choling, you can foolow the ravine where the train goes into and it needs 30 minutes. If you want to go back, 40 minitues’ walk is enough from the nunnery to the mian road into Lhasa.

Tashi Choling also has another way to get. Hike northeast up the ravine to the cliifside for 40 minutes, you can get hermitage of Dadren Ritro. The trail is a good place for you to see the hermitage. From here, trekkers can follow trails across the ridge fro an hour or two to sera Monastery.
Ways you can choose

To Pabonka, minibus 502 or 503 is a good choice. Stop at the Sera Monastery and turn-off on Nangrebeilu. Instead of taking turn right to Sera. Before the military hospital, you should turn left at the road. Five minutes later, turn right at the canal; 15 minutes later, take the branch to the left and at the end of road Pabonka is in front.

Attraction Transportation
You can fly to Lhasa Gonggar International Airport(拉萨贡嘎国际机场）and then take the bus to Lhasa City. And then you can drive by yourself or follow the leader to get to.