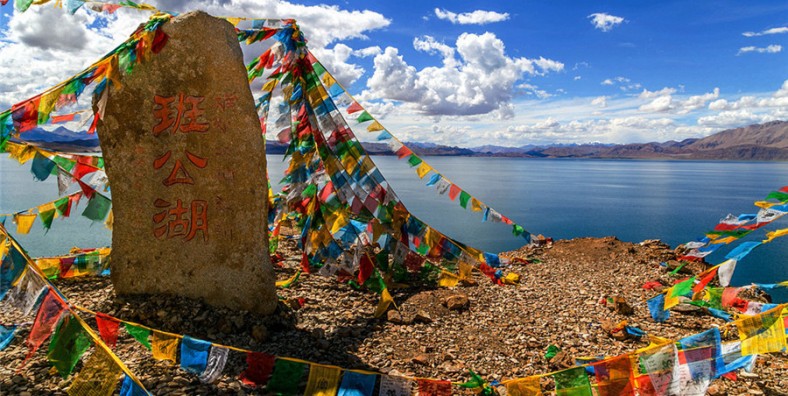 Pangong Tso, Tibetan for “high grassland lake”, also referred to as Pangong Lake, is an endorheic lake in the Himalayas（喜马拉雅山） situated at a height of about 4,350 m (14,270 feet). It is 134 km long and extends from India to China. Approximately 60% of the length of the lake lies in China. The lake is 5 km wide at its broadest point. All together it covers 604 km2. During winter the lake freezes completely, despite being saline water. It is not a part of Indus river basin area and geographically a separate land locked river basin.
The lake is in the process of being identified under the Ramsar Convention as a wetland of international importance. This will be the first trans-boundary wetland in South Asia under the convention.

The brackish water of the lake has very low micro-vegetation. Guides report that there are no fish or other aquatic life in the lake, except for some small crustaceans. On the other hand, visitors see numerous ducks and gulls over and on the lake surface. There are some species of scrub and perennial herbs that grow in the marshes around the lake.
The lake acts as an important breeding ground for a variety of birds including a number of migratory birds. During summer, the Bar-headed goose and Brahmini ducks are commonly seen here. The region around the lake supports a number of species of wildlife including the kiang and the Marmot.
Formerly, Pangong Tso had an outlet to Shyok River, a tributary of Indus River, but it was closed off due to natural damming. Two streams feed the lake from the Indian side, forming marshes and wetlands at the edges. Strand lines above current lake level reveal a 5 meters thick layer of mud and laminated sand, suggesting the lake has shrunken recently in geological scale. No fish have been observed in the lake, however in the stream coming from South-eastern side (Cheshul nalla), three fish species (Schizopygopsis stoliczkae, Triplophysa stoliczkae and Triplophysa gracilis) have been reported (Bhat et al., 2011). The low biodiversity in the lake has been reported as being due to high salinity and harsh environmental conditions.

1. At Lhasa you can take a long-distance bus to Shiquanhe, costing CNY600-700. Upon arrival at Shiquanhe, you can take a direct bus to Rutog County, which is only around 12 kilometers (7.4 miles) from the destination. There you can rent a car for the rest of the journey. Or you can rent a car at Shiquanhe to reach the attraction directly.
2. Fly from Lhasa to Ngari, where you can rent a car to the attraction. On the way, you can also visit Mt. Kailash and Lake Manasarova, Ruins of Guge Kingdom, Tholing Monastery etc.
3. If there is sufficient time and budget, you can also rent a car at Lhasa and drive there. It may be expensive, but well worth the money as well as time-saving.

1. Traveling Hours: 3~4 hours
2. Traveling Seasons: All year, the best time to travel is from May to October.
3.  High Altitude Sickness Avoiding: Bring enough water and some thick clothes, eating more fruits and vegetables rich in vitamins and so on.