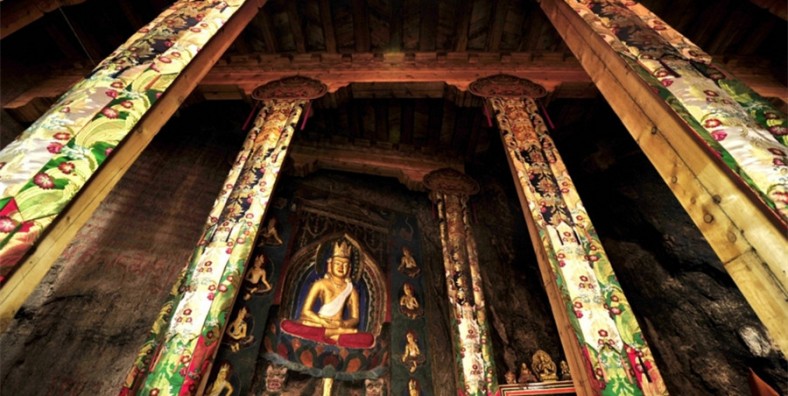 Renda Cliff Carving（仁达摩崖造像）is located in Danma Cliff（丹玛山崖）, Wangbu Township（旺布乡）, Zhagyab County（察雅县）, Chamdo Prefecture（昌都市）, Tibet Autonomous Region, which is 116 kilometers away from Zhagyab county seat. The local people called it Renda Vairochana Hall（仁达大日如来殿）according to the Buddha statue. The statue makes good use of the mountain cliffs and rocks. The main part of the cliff carving is Vairochana Buddha statue（大日如来佛）, the eight followers of the Buddha and two female flying gods, the attached Buddha Hubei Dragon King, and the upper part of the carving statue of Songtsen Gampo（松赞干布）and Princess Wencheng（文成公主）. There are Tibetan inscription and dozens of Chinese characters carved in the Tubo period（吐蕃时期）. On the right side of the statue, there is a Tibetan book of Puxian Willingness and Deeds（《普贤行愿品》）.

Renda Cliff Carving which is less than 200 meters long is found in Danma Mountain with 38 statues all about. The largest of them is 3.28 meters high, and the smallest is only 20 centimeters. Renda Cliff inscriptions accurately record the sculptures carved in 804 AD, also describes the Buddha, the great monk’s troublesome life in politics, pray for Tang and Tubo in good, great accomplishments and success of Tubo, all beings piece, etc.

The Value of Renda Cliff Carving and Danma Mozao Statues

Renda Cliff Carving and Danma Mozao Statues（丹玛摩造像）is the only ancient Tibet carving statue which combined Tibetan and Chinese. In addition, it has great and important value to the studies of the politics, culture, language, calligraphy, painting, sculpture and technology of Tubo period. Its findings fill the blanks of the Jinshi inscriptions（金石铭文）in the Tubo period of the Chamdo area and enrich the contents of Tubo Jinshi culture.

Tourist can travel to Lhasa by air or train firstly and then transfer to Zhagyab by long-distance bus, which is the major choice. And you can transfer from Qamdo to Zhagyab by tour bus as well.