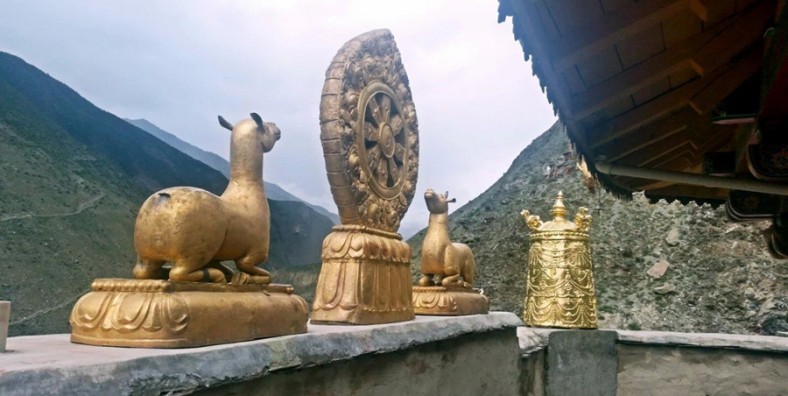 Located in Lhunze County（隆子县）, Lhoka Prefecture（山南地区）, Tibet Autonomous Region, Sanan Qulin Monastery（三安曲林寺）was built on a ridge of the north side of the Township Government in 1515 AD at 3,250 meters above sea level. It is the main tribe of Tibetan Buddhism Kagyu sect. According to historical records, Sanan Qulin Monastery reached in the most thriving stage among Baima Gebu（白玛嘎布）period, with about 4 times of the current monastery scale, more than thousands of monks, a number of fields, pastures and 4 manors which are Longxuxika（龙许溪卡）, Cimaxika（次麦溪卡）, Renboxika（仁波溪卡）, Zhibuxika（止布溪卡）, and approximately seven thousand livestock. During the Cultural Revolution, the monastery suffered serious damage. Fortunately, it was able to carry out normal religious activities with the government appropriations for maintenance in 1985.

The Architecture of Sanan Qulin Monastery

Sanan Qulin Monastery covers an area of 3,000 square meters. The main buildings are mainly in the east, including Dukang Hall（杜康大殿）built with stone wall, Buddhist Hall（佛殿）, and Lama Lakang（拉玛拉康）, etc. The Buddhist Hall worships the statue of Sakyamuni, which is about two stories high (8 ~ 10 meters high).

Dukang Hall（杜康大殿）of Sanan Qulin Monastery is now rebuilt on the former site of Gongkang Holy Hall（贡康神殿）, which is located in the western part of the original complex. There are mainly Scripture Hall（经堂）and Buddhist Hall（佛殿）on the first floor, and the reception room, warehouse, etc. on the second floor. The Scripture Hall is filled with murals which are contented in the image of Sakyamuni Buddha, White Tara（白度母）, and Chakrasamvara（胜乐金刚）, while the Buddhist Hall honors Byams-pa Buddha（强巴佛）and other Buddha statues.

Sanan Qulin Monastery in possession of a batch of beautifully carved Mani Stone Carvings, mainly include: Shakyamuni Buddha（释迦牟尼佛）and Amitayus（无量寿佛）etc. which are really vivid and amazing with high artistic value.