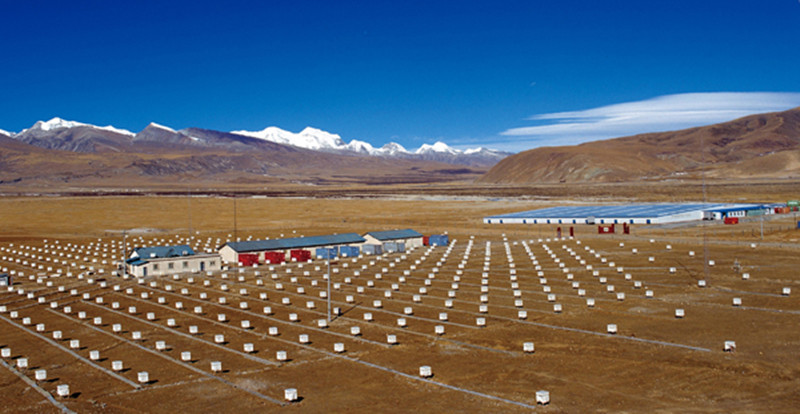 A joint research team made up of Chinese and Japanese scientists has discovered the highest energy cosmic gamma rays ever observed from an observatory in Tibet, opening a new window to explore the extreme universe.

The energy of the gamma rays is as high as 450 TeV, equivalent to 45 billion times of the energy of X-rays for medical diagnosis, researchers from the Institute of High Energy Physics (IHEP) of the Chinese Academy of Sciences said at a press conference on Wednesday.

Scientists believe that those energetic gamma rays were from the Crab Nebula, a famous supernova remnant in the constellation Taurus, about 6,500 light years away from Earth.

Previously, the highest energy ever observed for a gamma-ray photon was 75 TeV, which was detected by the HEGRA Cherenkov telescope in Germany.

“Before this discovery, many scientists believed that photons could not be accelerated to energy higher than 100 TeV,” said Huang Jing, a researcher from IHEP, and the co-spokesperson for the experiment.

“The discovery is a milestone in the search for the origin of the mysterious cosmic rays,” said Professor Chen Yang, an expert of supernova remnants from Nanjing University.

Scientists hypothesize the following steps for generating very-high-energy gamma rays: first, the electrons are accelerated up to PeV (one thousand trillion electron volts) in the nebula; then the PeV electrons interact with the cosmic microwave background radiation (CMBR), the remnant radiation from the Big Bang filling the whole universe; and then a CMBR photon is kicked up to 450 TeV by a PeV electron.

The researchers thus conclude that the Crab Nebula is the most powerful natural electron accelerator known in our Galaxy.

The Crab Nebula was produced by a supernova explosion in the year 1054, which was recorded in official historical documents of the Northern Song dynasty (960-1127).

In 1969, scientists discovered a pulsar, rotating 30 times per second, embedded in the nebula. In the modern era, the Crab Nebula has been observed at all electromagnetic wavelengths ranging from radio to very high energy gamma rays.

The observatory, located in the Yangbajing town of Tibet at an altitude of 4,300 meters, has been operated jointly by China and Japan since 1990.

The China-Japan collaboration added new underground detectors in 2014, which can suppress 99.92 percent of the cosmic-ray background noises, and thus improve the sensitivity significantly, Huang said.

During a period of about two years, a total of 24 gamma-ray photons above 100 TeV have been detected from the Crab Nebula, as a result of the innovative upgrading of the experiment, according to Huang.

“This is a significant first step forward. It proves that our techniques worked well, and gamma rays with energies up to a few hundred TeV really exist,” Huang said.

“This pioneering work opens a new window for the exploration of the extreme universe. The detection of gamma rays above 100 TeV is key to understanding the origin of very-high-energy cosmic rays, which have been a mystery since their discovery in 1912. With further observations using this new window, we expect to identify the origin of cosmic rays in our Galaxy,” Huang said.

The discovery will be published in the journal Physical Review Letters later in July.

“There might be many kinds of celestial bodies, such as supernova remnants, pulsars and black holes, which can produce high-energy particles in the universe. We are just beginning to understand such a high-energy universe. We are looking forward to achieving more progress in this field in the future,” said Zhang Shuangnan, director of the Division for Particle Astrophysics of IHEP.

As a follow-up project of the experiment in Tibet, China is constructing another large-scale observatory for detecting cosmic rays in Sichuan Province.

The project, known as Large High Altitude Air Shower Observatory (LHAASO), is located in the mountains of the eastern Qinghai-Tibet Plateau at an altitude of 4,410 meters, and some of its facilities have been completed and put into operation recently.

Compared with the observatory in Tibet, the energy range and sensitivity of LHAASO are 10 times higher, which will help improve the research of cosmic-ray physics and ultra-high energy gamma-ray astronomy to a new height, according to IHEP.

In addition, IHEP is taking the lead to push forward an international cooperation space science plan to explore the extreme universe (EXU). Cosmic-ray physics and high energy gamma-ray astronomy are also the main scientific objectives of the program, said Zhang.

The EXU and LHAASO projects, as well as other space and ground-based observatories, will carry out all-time and multi-band integrated observations on extreme celestial bodies, which will help improve the understanding of the universe, Zhang added.