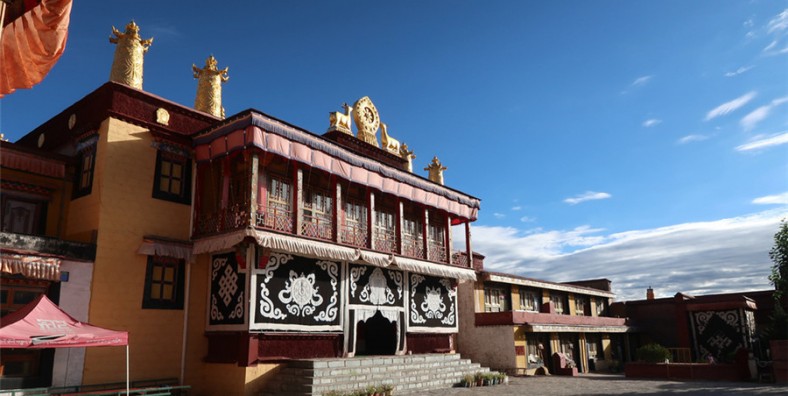 The monastery was destroyed in the Great Cultural Revolution. At present, the temple has been restored and rebuilt. Inside the main hall mainly placing the image of Buddha statues, such as, the three adults like, the iii-Buddha(三世佛), the Master Zongkeba and his three disciples(宗喀巴师徒三尊), as well as Lama Quegu Weise(确估伟色) .

The monastery is seating in the north facing south. There are three floors of the main hall within Xiezhulin Monastery, the first floor is the storehouse, the second floor is composed of the porch, the assembly hall, the temple of protector and the back hall. The third floor is composed of a monk’s house(僧舍), a Thousand-Buddha temple(千佛殿), a Sakyamuni temple and a meeting hall.

Gelug sect is the newest of the schools of Tibetan Buddhism.It was founded by Je Tsongkhapa (1357–1419), a philosopher and Tibetan religious leader. The first monastery he established was named Ganden and to this day the Ganden Tripa is the nominal head of the school, though its most influential figure is the Dalai Lama. Allying themselves with the Mongols as a powerful patron, the Gelug emerged as the pre-eminent Buddhist school in Tibet and Mongolia since the end of the 16th century.

Attraction Tips:
• Traveling Hours: 1 hour
• Traveling Seasons: All seasons
• High Altitude Sickness Avoiding: Bring enough water or drinks, fruits and snacks with high caloric content
• Bring a good, broad spectrum sunscreen with a high SPF factor and a high SPF lip sunscreen to protect your lips too.
• Never climb or sit on Buddhist statues or stupas.
• Avoid touching the head of monks or nuns and show respect to a nun or monk or spiritual teacher.
• Remove your shoes and your hat when entering a shrine room or monastery