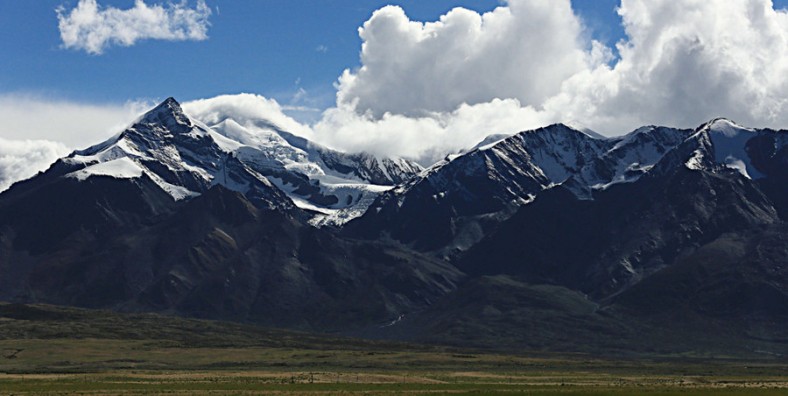 Shishapangma, also called Gosainthān, is the 14th highest mountain in the world at 8,027 metres (26,335 ft) above sea level. It was the last 8,000 metre peak to be climbed, due to its location entirely within Tibet and the restrictions on visits by foreign travelers to the region imposed by authorities of the Government of China and of the Tibet Autonomous Region.

Name
Geologist Toni Hagen explained the name as meaning a “grassy plain” or “meadow” (pangma) above a “comb” or a “range” (shisha or chisa) in the local Tibetan dialect, thereby signifying the “crest above the grassy plains”.

On the other hand, Tibetologist Guntram Hazod records a local story that explains the mountain’s name in terms of its literal meaning in the Standard Tibetan language: shisha, which means “meat of an animal that died of natural causes” and sbangma which means “malt dregs left over from brewing beer”. According to the story, one year a heavy snowfall killed most of the animals at pasture. All that the people living near the mountain had to eat was the meat of the dead animals and the malt dregs left over from brewing beer, and so the mountain was named Shisha Pangma (shisha sbangma), signifiying “meat of dead animals and malty dregs”.

The Sanskrit name of the mountain, Gosainthan, means “place of the saint” or “Abode of God”. Still, its most common name is Shishapangma.

Geography
Shishapangma is located in south-central Tibet, five kilometres from the border with Nepal. It is the only eight-thousander entirely within Chinese territory. It is also the highest peak in the Jugal Himal which is contiguous with and often considered part of Langtang Himal. The Jugal/Langtang Himal straddles the Tibet/Nepal border. Since Shishapangma is on the dry north side of the Himalayan crest and further from the lower terrain of Nepal, it has less dramatic vertical relief than most major Himalayan peaks. Shishapangma has a subsidiary peak higher than 8000 m: Central-Peak at 8008 m.

Ascents and attempts
Many of Shishapangma’s ascents are not well verified. Some people claiming to have reached the summit in fact only reached the lower central peak.

29 people have died climbing Shishapangma, including Alex Lowe and Dave Bridges (both US) in 1999, and veteran Portuguese climber Bruno Carvalho. Nevertheless, Shishapangma is regarded as one of the easiest eight-thousanders to climb. The most common ascent via the Northern Route ascends via the northwest face and northeast ridge and face, and has relatively easy access, with vehicle travel possible to base camp at 5,000 m (16,400 ft). Routes on the steeper southwest face are more technically demanding and involve 2,200 metres (7,220 ft) of ascent on a 50-degree slope.

Attraction Transportation:
We can take a shuttle bus from Shigatse to Nyalam County, then transfer a local mini bus to Shishapangma Mountain.
Attraction Travel Tips:
· pay attention to respect the local customs.
· 4 – 5 hours travel.
· best season to travel: all the year round.