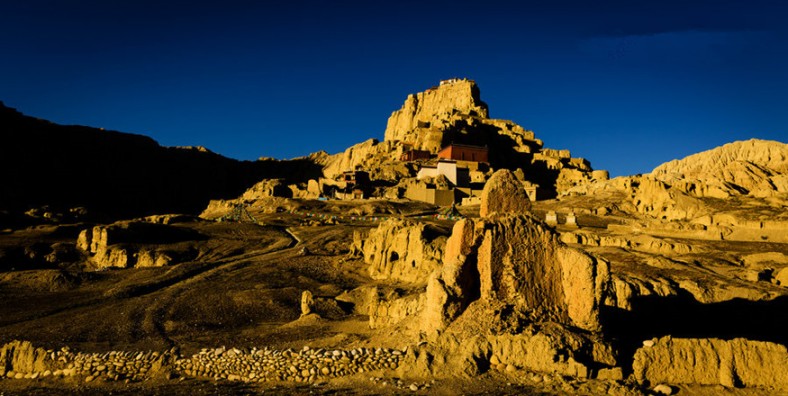 About The Site of Ancient Guge Kingdom

Guge was an ancient kingdom in Western Tibet. The kingdom was centered in present-day Zanda County, within Ngari Prefecture of Tibet. At various points in history after 10th century A.D, the kingdom held sway over a vast area including south-eastern Zanskar, Upper Kinnaur, and Spiti valley either by conquest or as tributaries.

History and Development of The Site of Ancient Guge Kingdom

Guge was founded in the 10th century. Its capitals were located at Tholing Coordinates: 31°28′55″N 79°48′01″E and Tsaparang. Nyi ma mgon, a great-grandson of Glang Darma, the last king of the Tibetan kingdom of Tubo, left insecure conditions in Central Tibet in 910. He established a kingdom in Ngari (West Tibet) in or after 912 and annexed Purang (Pu-hrang) and Guge. He established his capital in Guge.

Nyi ma mgon later divided his lands into three parts. The king’s eldest son dPal gyi mgon became ruler of Mar-yul (Ladakh), his second son bKra shis mgon received Guge-Purang, and the third son lDe gtsug mgon received Zanskar. bKra shis mgon was succeeded by his son Srong nge or Ye shes ‘Od (947-1024), who was a renowned Buddhist figure. In his time a Tibetan from Guge called Rin chen Bzang po (958-1055), after having studied in India, returned to his homeland as a monk to promote Buddhism. Together with the zeal of Ye shes ‘Od, this marked the beginning of a new diffusion of Buddhist teachings in western Tibet. In 988 Ye shes ‘Od took religious vows and left kingship to his younger brother Khor re.

In 1037, Khor re’s eldest grandson ‘Od lde was killed in a conflict with the Qarakhanids, who subsequently ravaged Ngari. His brother Byang chub ‘Od (984-1078), a Buddhist monk, took power as secular ruler. He was responsible for inviting Atisha to Tibet in 1040 and thus ushering in the so-called Phyi-dar phase of Buddhism in Tibet. Byang chub ‘Od’s son rTse lde was murdered by his nephew in 1088. This event marked the break-up of the Guge-Purang kingdom, since one of his brothers was established as separate king of Purang. The usurping nephew dBang lde continued the royal dynasty in Guge.
A new Qarakhanid invasion of Guge took place before 1137 and cost the life of the ruler, bKra shis rtse. Later in the same century the kingdom was temporarily divided. In 1240 the Mongol khagan, at least nominally, gave authority over the Ngari area to the Drigung monastery in Central Tibet.
Grags pa lde was an important ruler who united the Guge area around 1265 and subjugated the related Ya rtse kingdom. After his death in 1277 Guge was dominated by the Sakya monastic regime. After 1363, with the decline of the Mongol Yuan dynasty and their Sakya protegés, Guge was again strengthened and took over Purang in 1378. Purang was henceforth contested between Guge and the kingdom of Mustang, but was finally integrated in the former. Guge also briefly ruled over Ladakh in the late 14th century. From 1499 the Guge king had to acknowledge the Rinpungpa rulers of Tsang (West Central Tibet). The 15th and 16th centuries were marked by a considerable Buddhist building activity by the kings, who frequently showed their devotion to the Gelugpa leaders later known as Dalai Lama.

The first Westerners to reach Guge were a Jesuit missionary, António de Andrade, and his companion, brother Manuel Marques, in 1624. De Andrade reported seeing irrigation canals and rich crops in what is now a dry and desolate land. Perhaps as evidence of the kingdom’s openness, de Andrade’s party was allowed to construct a chapel in Tsaparang and instruct the people about Christianity. This decision might have brought Guge to its end. A letter by De Andrade relates that some military commanders revolted and called the Ladakhis to overthrow the ruler. There had been friction between Guge and Ladakh for many years, and the invitation was heeded in 1630. The Ladakhi forces laid siege to the almost impenetrable Tsaparang. The king’s brother, who was chief lama and thus a staunch Buddhist, advised the pro-Christian ruler to surrender against keeping the state as tributary ruler. This treacherous advice was eventually accepted. Tibetan sources suggest that the Guge population was maintained in their old status. A legend has it that the Ladakhi army slaughtered most of the people of Guge, about 200 of whom managed to survive and fled to Qulong. The last king Khri bKra shis Grags pa lde was brought to Ladakh as prisoner with his kin, and died there. The last male descendant of the dynasty moved to Lhasa where he died in 1743.

Western archeologists heard about Guge again in the 1930s through the work of Italian Giuseppe Tucci. Tucci’s work was mainly about the frescoes of Guge.

1. Travel to Zanda County, visitors would better start from SHiquan River taking a taxi for about CNY 2000 about 12 hours for convenience, but it’s too expensive.
2. The Shiquan River has a shuttle bus to Zanda, which is normally start at noon every day, but less likely to cancel, the ticket price is 220 ~ 260 yuan, which can be negotiated.