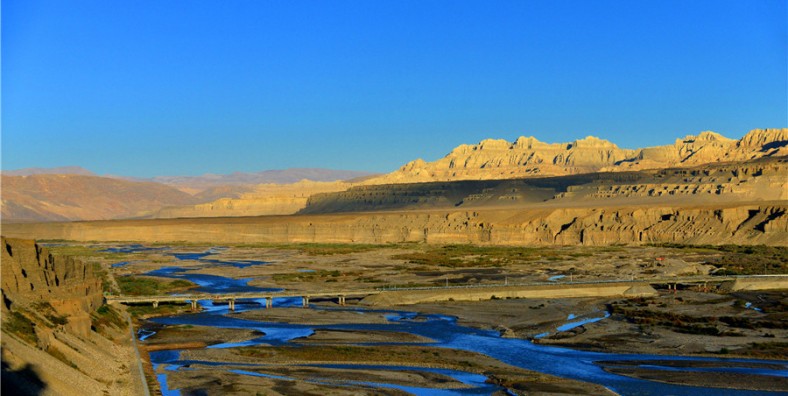 The Sutlej River (alternatively spelled as Satluj River) (Punjabi: ਸਤਲੁਜ, Sanskrit: शतद्रुम (shatadrum)[citation needed], (Urdu: دریائے ستلُج ‬‎), is the longest of the five rivers that flow through the historic crossroads region of Punjab in northern Indiaand Pakistan. The Sutlej River is also known as Satadree[2] It is addressed as Shatarudra by the Gorkhalis.[3] It is the easternmost tributary of the Indus River.

The waters of the Sutlej are allocated to India under the Indus Waters Treaty between India and Pakistan, and are mostly diverted to irrigation canals in India.[4] There are several major hydroelectric projects on the Sutlej, including the 1,000 MWBhakra Dam, the 1,000 MW Karcham Wangtoo Hydroelectric Plant, and the 1,530 MW Nathpa Jhakri Dam.[5] The river basin area in India is located in Himachal Pradesh, Punjab, Jammu and Kashmir, Rajasthan and Haryana states.[6][7]

The source of the Sutlej is west of Lake Rakshastal in Tibet, as springs in an ephemeral stream channel descending from this lake. Rakshastal in turn is ephemerally connected by Ganga Chhu to sacred Lake Manasarovar about 4 km further east. The nascent river flows at first west-northwest for about 260 kilometres (160 mi) under the Tibetan name Langqên Zangbo(Elephant River or Elephant Spring) to the Shipki La pass, entering India in Himachal Pradesh state. It then turns slightly, heading west-southwest for about 360 kilometres (220 mi) to meet the Beas River near Makhu, Firozpur district, Punjab state. Ropar Wetland in Punjab state is located on the Sutlej river basin, evidence suggest Indus Valley Civilisation also flourished here.[8][better source needed] Ungti Chu and Pare Chu rivers which drain south eastern part of Jammu and Kashmir state are tributaries of Sutlej river.[9][7]

About 17 kilometres (11 mi) north of Uch Sharif, the Sutlej unites with the Chenab River, forming the Panjnad River, which finally flows into the Indus river about 100 kilometres (62 mi) west of the city of Bahawalpur. The area to the southeast on the Pakistani side of the Indian border is called the Cholistan Desert and, on the Indian side, the Thar Desert.[citation needed]

The Indus then flows through a gorge near Sukkur and the fertile plains region of Sindh, forming a large delta region between the border of Gujarat, India and Pakistan, finally terminating in the Arabian Sea near the port city of Karachi, Pakistan. During floods, Indus river water flows in to Indian part of Great Rann of Kutch. Thus Gujarat state of India is also a riparian state of Indus river as Rann of Kutch area lying west of Kori Creek in the state is part of the Indus River Delta.[10]

The Sutlej, along with all of the Punjab rivers, is thought to have drained east into the Ganges prior to 5 mya.[11]

There is substantial geologic evidence to indicate that prior to 1700 BC, and perhaps much earlier, the Sutlej was an important tributary of the Ghaggar-Hakra River (thought to be the legendary Sarasvati River) rather than the Indus, with various authors putting the redirection from 2500 to 2000 BC,[12] from 5000 to 3000 BC,[13] or before 8000 BC.[14] Geologists believe that tectonic activity created elevation changes which redirected the flow of Sutlej from the southeast to the southwest.[15][citation needed] If the diversion of the river occurred recently (about 4000 years ago), it may have been responsible for the Ghaggar-Hakra (Saraswati) drying up, causing desertification of Cholistan and the eastern part of the modern state of Sindh, and the abandonment of Harappan settlements along the Ghaggar. However, the Sutlej may have already been captured by the Indus thousands of years earlier.[citation needed]

There is some evidence that the high rate of erosion caused by the modern Sutlej River has influenced the local faulting and rapidly exhumed rocks above Rampur.[16]This would be similar to, but on a much smaller scale than, the exhumation of rocks by the Indus River in Nanga Parbat, Pakistan. The Sutlej River also exposes a doubled inverted metamorphic gradient.[17]

There has been a proposal to build a 214-kilometre (133 mi) long heavy freight and irrigation canal, to be known as the Sutlej-Yamuna Link (SYL) to connect the Sutlej and Yamuna rivers.[18] The project is intended to connect the Ganges, which flows to the east coast of the subcontinent, with points west, via Pakistan. When completed, the SYL would enable inland shipping from India’s east coast to its west coast (on the Arabian sea) without having to round the southern tip of India by sea, vastly shortening shipping distances, alleviating pressures on seaports, avoiding sea hazards, creating business opportunities along the route, raising real estate values, raising tax revenue, and establishing important commercial links and providing jobs for north-central India’s large population. However, the proposal has met with obstacles and has been referred to the Supreme Court of India. To augment nearly 100 tmcft water availability for the needs of this link canal, Tso Moriri lake/Lingdi Nadi (a tributary of Tso Moriri lake) waters can be diverted to the Sutlej basin by digging a 10 km long gravity canal to connect to the Ungti Chu river.[7][19]

The Upper Sutlej Valley, called Langqên Zangbo in Tibet, was once known as the Garuda Valley by the Zhangzhung, the ancient civilization of western Tibet. The Garuda Valley was the centre of their empire, which stretched many miles into the nearby Himalayas. The Zhangzhung built a towering palace in the Upper Sutlej Valley called Kyunglung, the ruins of which still exist today near the village of Moincêr, southwest of Mount Kailash (Mount Ti-se). Eventually, the Zhangzhung were conquered by the Tibetan Empire.

The boundaries of Greater Nepal extended westward to beyond Satluj River until the tide turned in 1809 and Kangra king repulsed Gorkha army eastward with help from Maharaja Ranjit Singh.

Today, the Sutlej Valley is inhabited by nomadic descendants of the Zhangzhung, who live in tiny villages of yak herders.[citation needed]

The Sutlej was the main medium of transportation for the kings of that time. In the early 18th century, it was used to transport devdar woods for Bilaspur district, Hamirpur district, and other places along the Sutlej’s banks.[citation needed]

Of four rivers (Indus, Sutlej, Brahmaputra and Karnali/Ganges) mythically flowing out of holy Lake Manasarovar, the Sutlej is actually connected by channels that are dry most of the time.