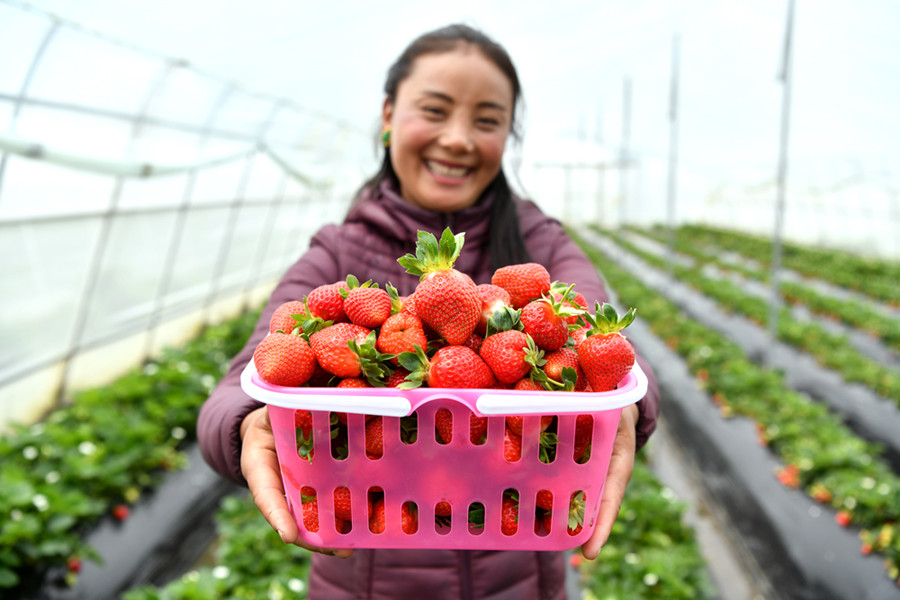 About 30 km west of Nyingchi, a city in Tibet Autonomous Region, is a strawberry greenhouse base. From the field to the shelf, it only takes half an hour for the fresh and perfect-looking strawberries to enter the homes of those who live on the roof of the world.

“It would all be impossible without the Sichuan-Tibet highway,” said Dobrgyal, Party chief of Jiuba Village.

Early in the morning, Yangzom, 39, entered her greenhouse and began picking strawberries. Then she took a bus to sell them in the nearby city market.

“You have to work almost all day, except at noon when the sun is out, and the temperature is too high in the greenhouse,” she said. “But compared with highland barley, I earn much more from selling strawberries.”

She said a kilo of strawberries sells for 60 to 80 yuan. She also opens the greenhouse to the public, with the price for self-picked strawberries set at 100 yuan per kilo.

The villagers used to make a living by lumbering and picking matsutake. Tibet imposed a ban on logging of natural forests in 2002, which cut the major source of income for the 120 villagers in Jiuba.

Dobrgyal said the village became so poor that young people didn’t want to stay. There wasn’t even a proper meeting room or a cement road in the village. Cow and pig feces were everywhere, so stinky that no females wanted to marry the men there.

In 2006, a methane tank was built in the village. With the help of the local agricultural bureau, a 20-square-meter greenhouse was erected on top of the tank. Villagers bought vegetable seeds and were surprised to find that turnips and cabbages were so easy to grow. Hugely encouraged, they built greenhouses on other idle lands of over 1,100 square meters.

The strawberries, white gourds, cabbages and corn harvested in the greenhouses sold for over 8,300 yuan, 10 times more than the highland barley they used to grow. Strawberries were especially lucrative.

In May 2008, 23 simple greenhouses were built for growing strawberries. With a special fund from the local agricultural bureau, Dobrgyal and experts of the bureau went to neighboring Sichuan Province to learn about various planting techniques and bought 70,000 strawberry seedlings for free distribution among fellow villagers.

A cooperative was set up soon after, which attracted over 60 villagers from 16 poverty-stricken households. In 2010, every household in Jiuba had a greenhouse, which brought an additional income of 30,000 yuan a year. In 2011, the per capita net income of the village exceeded 10,000 yuan.

Last year, each of the 28 households in the village had two steel-frame greenhouses, with an average strawberry production of 400 kg — a very high yield considering the climate conditions on the plateau. The whole village reaped 1.85 million yuan from strawberries.

Yangzom’s 52-year-old neighbor Wongdui has been growing strawberries for 10 years. With the increased income, he built a two-story villa of over 300 square meters. Last year he bought his second car — an SUV so that he could go travel with his family more conveniently.

Over six decades ago, the highway connecting Tibet and Sichuan opened to traffic, bringing prosperity and hope to cities and villages along it.

Jiuba Village has taken on a completely different look, with rows of Tibetan-style villas and all kinds of infrastructure including a villagers’ service hall, a square, a library, a basketball court and a clinic.

Dobrgyal said he planned to expand the market for their strawberries and increase villagers’ incomes further.