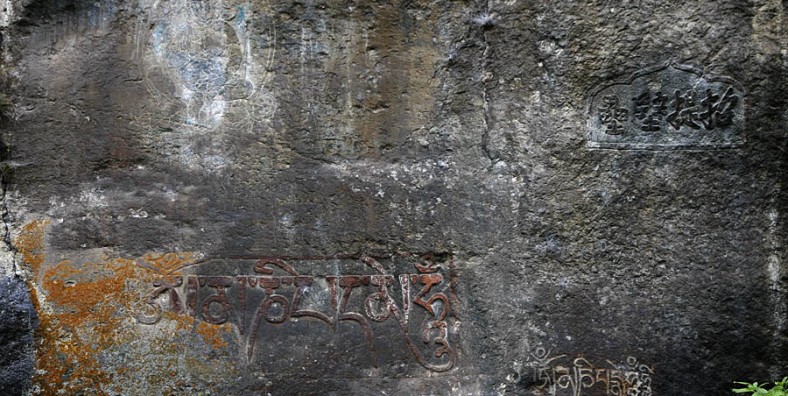 Construction and Development of the Stone Tablet

Located on the cliff wall in the northern part of Gyirong County, Tibet autonomous region, Tang Dynasty Stone Table of Tianzhu Messenger is about 1.5 meters with a canopy cover. The cliff foot is surrounded by the water canal, which is about 5 meters from the surface. The stone tablet is inscribed with intaglio skills, which are literally 81.5 cm and 53 cm high with the lower part being destroyed. It is inscribed with the regular script with seven Chinese characters writing “Datang Tianzhu Shichu Ming “.

The Meaning and Value of the Tablet

Because of years of weathering and erosion, the inscription characters have been blurred. However, from the epigraphic characters of Xianqing Third year of Tang Dynasty, we can know it was built in Tang dynasty in memory of the Messenger Wang Xuance of Tang Dynasty who had been sent a diplomatic mission to Tianzhu and travel through Gyirong County. This precious tablet is of great significance and value to the further study of ancient Tang and Tubo relations and other issues. On June 25th, 2001, Tang Dynasty Stone Table of Tianzhu Messenger, as an ancient building in 658 AD, was approved by the state council as a key cultural relic protection unit in China.

Up to 1960 one of the main trade routes between Nepal and Tibet passed through this region. Easily accessible from Nepal, it was used several times as an entrance gate for military actions from the site of Nepal against Tibet. In 2017, Chinese soldiers began building a new road on the Tibetan side of the border, and intend to continue construction into Nepal pending approval from Kathmandu.

Gyirong County shares convenient transportation, so you can take the aircraft or train, even driving to here. The Shigatse Peace Airport is 525.7 km from Gyirong County which takes you 14 hours to drive. The trains have been opened from Lhasa to Shigatse. The whole journey is 253 kilometers; about 3 hours’ drive and just cost 40 yuan.