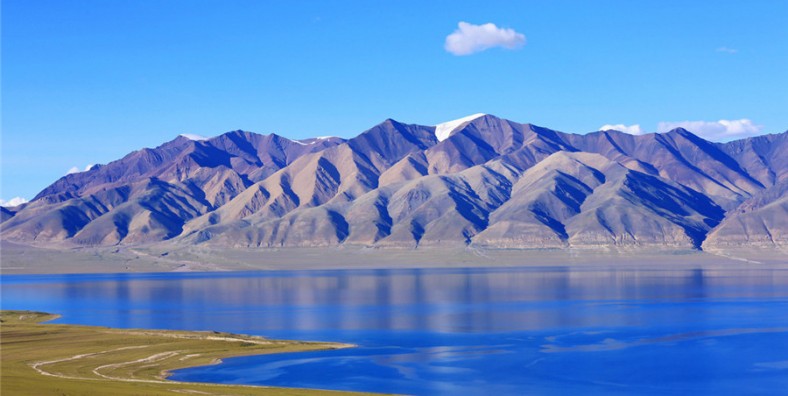 Tangra Yum Tso, situated in the southwest of Nyima County, is a holy lake of Bon Sect in Tibet. Being as the forth largest salt lake in China (the second largest salt lake is Namtso Lake) , it lies in the deep lake basin bottom, with 4,530 meters above sea level, extending in the north-east direction, with the length of 70 km, width of 15-20 km. It is said that water of the lake may change into three different colors a day. In the west bank, there stand continuous dark red cliffs, just like a row of screen.

The south-north running Tangra Yum Tso is like a sole, with 3 sides guarded by mountains. Only the eastern side of Darguo Mountain has a gap. Darguo Mountain has 7 peaks whose mountain body is black, with the top covered by white snow, like 7 well arranged pyramids. Together with Tangra Yum Tso, it is regarded as holy land by Bon pilgrims. The Yuben Monastery built in the cliff cave at the lake side is said to be the oldest monastery of Bon.

Tangra Yum Tso is located in the lonely Wenbu wasteland. In the world’s famous “depopulated zone”, there are only 1 people per 6 square kilometers in the Wenbu District. Yet there is a small village with nearly 100 households—Wenbu Village at the side of Tangra Yum Tso. Majority of the villagers live partly on agriculture, partly on livestock. They explored a little field on the lakeshore and plant barley, tomatoes, cole and green cabbages etc. It’s amazing to see these plants being planted in the place above elevation 4,500 meters, owning to the Lake District climate.

It is said that long time ago, people living here had no barley. They had to drive sheep fully loaded with salt to other places to exchange the barley. Owning to the long distance, people would suffer from cold and hunger all the way. A couple– Darguo Mountain and Tangra Yum Tso decided to change this miserable situation. They went on en expedition and grabbed a bag of barley from Quxui. When fighting his way back, an arow hit this bag and barley spilled out. After getting back, only a handful barley were saved. He scattered the barley by the lake and his wife cultivated it with her milk. Finally they got thriving harvest of barley for this village.

In order to thank the couple, from then on, people from Wenbu village have been worshiping the holy mountain and holy lake by offering sacrifices to them before Spring plowing and Autumn harvesting.

You can buy some air dying mutton here, which is by the way super tasty.