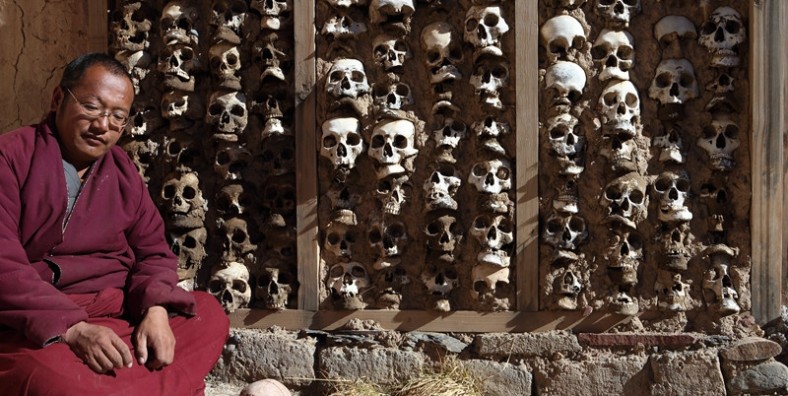 About The Skeleton Wall

The skeleton wall is located in the Dodoka Monastery(达木寺), which is halfway between Sok and Nagchu(那曲镇), on the south of the G317 Highway. This skeleton wall is one of Tibetan’s strangest, least-visited sights. From far, this wall looks like a typical Tibetan mini wall. However, instead of using prayer stones, this wall is made of thousands actual human skulls. These skulls are from sky burials carried out within the nearby courtyard.

History and Development of The Skeleton Wall

No one and no legend know why these monasteries display human skeletons, but monks said they illustrate these skeleton because they want to tell people no matter what they do or who they are, after death, they are all equal here in this wall.

There are only three monasteries in Tibet have ever carried out to display human skulls. The other two are Ridazeng Monastery and Quedai Monastery. All these three monasteries are in Biru County. The action of displaying skulls had stopped once during the Cultural Revolution with skull loss, however, in the past 10 years, Dodaka’s monks revived this activity.

In 1965, the Heichang highway was opened to traffic, and then the general roads and country roads were built in Biru County. The closest airport is Lhasa Gonggar Airport about 625 km from Biru County; there are 256.7 km from Nagqu Railway Station to Biru County. Tourist can travel by air or train firstly and then transfer to long-distance bus or self-driving which is the wise choice.

1. Traveling Hours: 1~2 hours
2. Traveling Seasons: All year, and the best time to travel is Spring and Autumn.
3.  High Altitude Sickness Avoiding: Bring enough water and some thick clothes, eating more fruits and vegetables rich in vitamins and so on.
4. Pay attention to respect the local customers.