Tibetan Opera sings through the ages 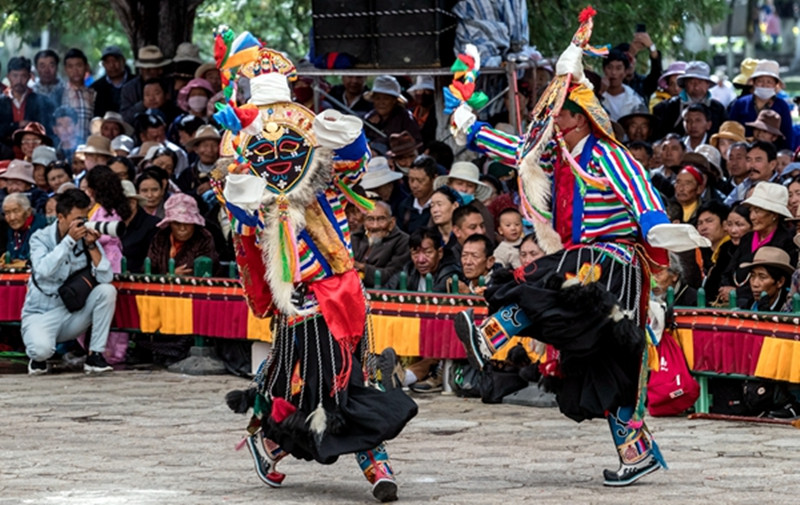 Tibetan Opera was showcased at the recent China Theater Festival in Fuzhou, Fujian province. The art form was inscribed by UNESCO as an intangible cultural heritage 10 years ago.

“It shows that the value and charm of the ancient art are still relevant, even outside Tibet and among those who don’t speak Tibetan,” says Bamdien Wangjo, head of the Tibetan Opera Troupe from Southwest China’s Tibet autonomous region.

The 600-year-old genre combines talking, singing, acting, dancing and literature. It is regarded as a “living fossil” of Tibetan culture.

Shows are based on folklore, legends and Buddhist classics. Traditional plays are usually staged on wheat-threshing floors, pastures, gardens and forests during the daytime, without any curtains or lighting. Actors wearing masks perform alongside drums and cymbals.

“People today don’t have that much spare time, and only succinct and clear plots can attract more people,” Bamdien Wangjo says.

His play, The Love of the Six-string Guitar, is two hours and 10 minutes long. Besides the signature resounding and vigorous vocals, audiences can also appreciate Tibetan dress and dancing. The number of mask-wearing performers has also been minimized, allowing audiences to see more facial expressions. The stage effects include snowflakes, wind and vivid garden settings.

The play tells the story of a Tibetan serf girl and the son of a noble family who fall in love because of a six-string guitar. Their love is doomed due to the disparity of their statuses but they manage to spend their twilight years together, thanks to the democratic reform that happened in Tibet 60 years ago.

Despite the declining influence of Tibetan operas, the protection and inheritance of the genre have been stepped up over the past decades. The government-funded Tibetan Opera troupe was established in the 1960s.

Tibetan Opera was included in the first batch of national-level intangible cultural heritage in 2006, three years before its recognition by UNESCO.

To mark the 10th anniversary of the UNESCO listing, the troupe is driving the “modernization” of the traditional art form using stage technologies, digital marketing and modern shows.

“Creating a new show usually takes two years and needs an upfront investment of more than 2 million yuan ($284,000). But new titles are more modern and accepted by the masses,” says Bamdien Wangjo.

He has been working with the troupe for 24 years and is the first Tibetan Opera artist to receive the Plum Blossom Prize, the top theater award in China.

“It’s not only a personal honor but, more importantly, it elevates the status and influence of Tibetan operas as a whole,” he says.

Tibet has 154 Tibetan Opera performance groups. The regional culture department says the central and local governments have invested nearly 50 million yuan in the protection and inheritance of the art form, and another 24 million yuan in the construction of related facilities.

“We will receive 1.5 million yuan in subsidies from the government as long as we put on 60 performances next year,” says Penpa Sinoh, head of a folk opera group in Lhasa, adding that the days of his group members running restaurants and driving taxis to support themselves are over.

Thanks to the booming tourism industry, the troupe does not have to depend on government subsidies to make ends meet. In November, 28 performers from Penpa Sinoh’s group staged performances in Beijing, Tianjin, Chengdu and other cities. Each had earned about 7,000 yuan by the tour’s end.

“With support from the government and market, we are confident we can pass along this heritage,” Penpa Sinoh says.