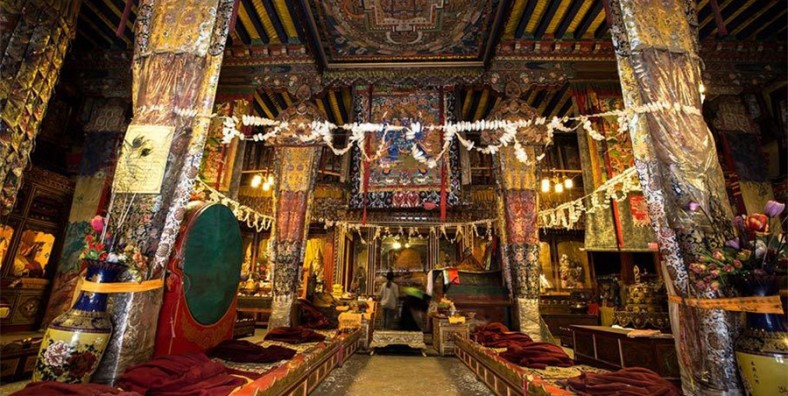 Chinese Name：昌珠寺
English Name:  Tradruk Monastery
Location: Located in Nedong County(乃东区), Lhoka Prefecture(山南市), Tibet Autonomous Region, China
Admission fee: 70 RMB
Opening hours: 9：00～16：00
About Tradruk Monastery
Tradruk Monastery is the largest and most important of the surviving royal foundations in the Yarlung Valley(雅鲁藏布江河谷). It is said to have been founded in the 7th century under king Songtsän Gampo.
According to one legend, Tradruk was one of twelve geomantic temples, the Tadül “Border Subduers” and Yangdül “Further Taming” that were built to hold down the huge supine ogress under Tibet: Tradruk was said to stand on her left shoulder, Katsel and Gyama in Maizhokunggar County( 墨竹工卡县) on her right shoulder and the Jokhang in Lhasa on her heart. According to another legend, at the site of the monastery there was originally a lake inhabited by a dragon with five heads. Songtsän Gampo was able to call a huge falcon by meditation, which defeated the dragon and drank all the water of the lake, so that the temple could be built. This legend would explain the name of the temple.
History and Development of Tradruk Monastery
Tradruk is said to have been the second of Tibet’s earliest great geomantric temples after the Jokhang, and some sources even place it earlier. Under the rule of Trisong Detsen (755–797) and Muné Tsenpo, Tradruk was one of the three royal monasteries.
During the persecution of Buddhism under Langdarma (841–846) and during the Mongol invasion from Dzungaria in the 16th century, the monastery was heavily damaged. In 1351, Tradruk was restored and enlarged; during the reign of the 5th Dalai Lama (1642–1682), the monastery got a golden roof and under the 7th Dalai Lama (1751–1757), it was further expanded. In the late 18th century, Tradruk is said to have had 21 temples. Several buildings were destroyed during the Cultural Revolution. During the 1980s, the monastery was renovated and in 1988 it was reconsecrated. Today, the complex has an area of 4667 square metres and is under national protection. Tradruk is a stop on the Yarlung pilgrimage route called “three sanctuaries, three chortens.”
Main Attractions- Tradruk Monastery
The centre of the temple is the innermost chapel, which is said to date back to the original temple built by Songtsen Gampo; according to the legend, it held Buddha statues of stone and a Tara statue. Today, the chapel houses clay figures which are said to contain fragments of the original statues.
The most important treasure of Tradruk is a thangka embroidered with thousands of pearls which is said to have been made by Princess Wencheng herself. It depicts Wencheng as White Tara. The thangka is kept in the central chapel on the upper floor. It is one of only three thangkas made by Wencheng. The two others are in the reliquary stupa of the 5th Dalai Lama in the Potala Palace in Lhasa and in Xigazê. There is a famous “talking” statue of Padmasambhava at the age of eight years in the same room in Tradruk.
Tradruk used to have a famous bell on the verandah which is not in the monastery any more with an inscription containing the name of Trisong Detsen, who probably enlarged and embellished the original buildings.
Attraction Transportation
You can fly to Lhasa Kongga International Airport(拉萨贡嘎国际机场）and then take the bus to Lhasa. There are some bus going to Nedong County, Lhoka Prefecture from Lhasa.
Attraction Travel Tips
1. Traveling Hours: 2～3 hours
2. Traveling Seasons: All year
3.  High Altitude Sickness Avoiding: Bring enough water and some thick clothes, eating more fruits and vegetables rich in vitamins and so on.
4.Pay attention to respect the local customers in the monastery.