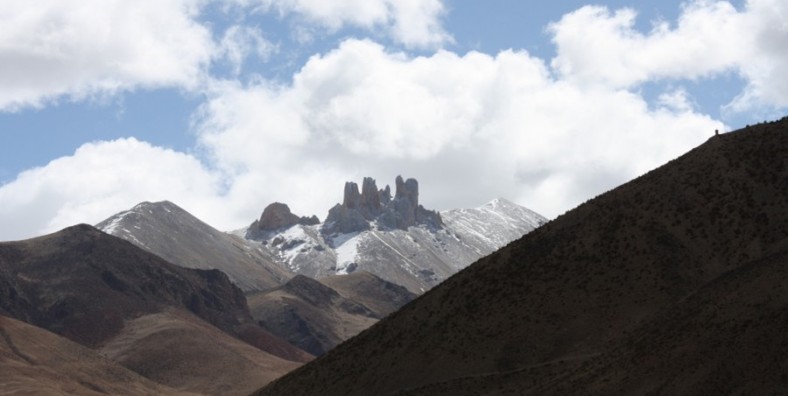 But many people don’t know that there is also a Wuzhi Mountain in Tibet, which is located in Wengxi Wuzhong Mountain, Lhorong County, Chamdo Prefecture, Tibet Autonomous Region. Wengxi Wuzhong Mountain is situated be No. 303 National Highway, 35 kilometers of the east of Lhorong County. Among layers of the mountains, there are a few graceful upright mountain peaks. No matter viewed from any side and any point, they are like three girls carrying water on their backs. People call it the “three sisters carrying water. Wuzhong Mountain is also known as Wuzhi Mountain because of the appearance of the fingers-like mountains. It is said that this mountain is recorded in the Heroic Epic of King Gesar, so it is believed and worshipped by the local people. Looked from a distance, the mountain forms a cornucopia shape. The upright mountain peaks point directly to the sky, and the surrounding peaks are very different and very strange. Against the blue sky and white clouds and golden autumn leaves, Wuzhi Mountain is particularly attractive.

Passengers can take airport shuttle bus to Lhorong County from the airport.
The airport inquiry number is +86 0895-4821004.

Bus
The Prefecture is over 1,200 kilometers (746 miles) from Chengdu and over 1,100 kilometers (684 miles) from Lhasa. Every week at least three buses travel between Qamdo and the two cities. Apart from regular buses, the tourist bureau sometimes sends special buses to Lhasa for visitors. They do not drive at night, so the whole journey may take five or six days. For individual tourists, hiring passing cars, mostly freight cars, is the best choice. These cars usually pick up passengers at the bus station in Lhorong County, and visitors can negotiate the details with the drivers.