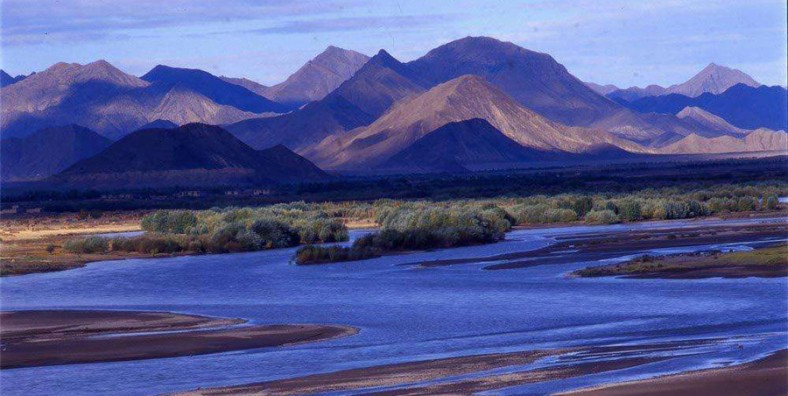 Yalong means “the river down from the upper reaches” in Tibetan language, originated in Yardoi mountain(雅拉香波山) , the snow all year round top of the mountain, cloud-filled. Yalong River is northbound 80 kilometers west of Zendang(泽当镇), into the Yarlung Zangbo River(雅鲁藏布江), a total length of only 68 kilometers, 3500 meters above sea level, but extremely famous in Tibetan history.

History and Development of Yalong River

The Yalong River has a large amount of water and irrigates the fields in the lower valley. There are many ancient villages scattered along the banks of the river, with many historical sites and monuments preserved, as well as colorful myths and legends. From the Tibetan people, the story of “people are monkeys and originated in the Yalong River” has long been circulated. Legend has it that the Goddess of Mercy traveled from the South China Sea this year, see this vast land uninhabited, then droping the Witch and a local monkey, resulting in offspring. Goddess of Mercy also took the seeds of barley and taught the little monkeys how to cultivate, and from then on the Tibetan soil grew grain, the monkey became a man. It is said that the Salar Village(撒拉村) 2.5 km south of Zedang(泽当镇) was the place where the first food was grown. Nowadays, every seeding season people sing and dance come and pray in all directions and take away some “God earth” on the land, in order to bless ancestors and get a good harvest.

Yalong River is the cradle of Tibet’s ancient civilization and one of the cradles of Tibetan nationality. In 1988, the State Council approved the Yalong River Basin in Lhoka Prefecture as the second batch of national-level scenic spots – Yalong Scenic Area, which is also the first national scenic area in Tibet. Yalong River area is the earliest birthplace of Tibetan culture, the earliest palace in TibetYungbulakang Palace , an important temple in Tibet Tradruk Monastery, Tibet’s largest tomb King Tombs group, as well as ancient village pastoral, honest folk customs.

You can fly to Lhasa Kongga International Airport(拉萨贡嘎国际机场）or take the train and then take the bus to Lhasa. There are some bus going to Yalong Scenic Area directly from Lhasa. It is about 40 RMB for back and forth.

1. Traveling Hours: one day
2. Traveling Seasons: All year
3.  High Altitude Sickness Avoiding: Bring enough water and some thick clothes, eating more fruits and vegetables rich in vitamins and so on.
4.Pay attention to respect the local customers in the monastery.