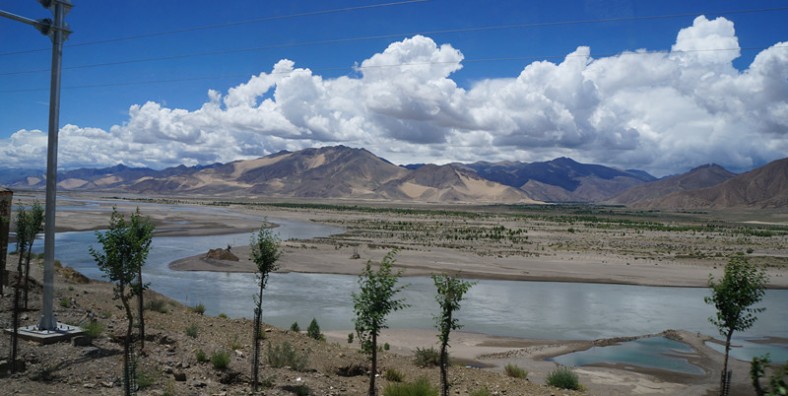 The Yarlung Tsangpo and the adjoining Chongye Valley formed the original seat of the Yarlung Dynasty of Tibetan kings and controlled important ancient trade routes into India and Bhutan. The first Tibetan Emperor,Songtsen Gampo, moved the capital to Lhasa after greatly expanding his territories and power.

The valley, often referred to as the “cradle of Tibetan civilization”, is only 72 km long, but contains a number of important castles, monasteries, temples, meditation caves, peaks and stupas. There are three renowned power places, Sheldrak, Trandruk Monastery, and Yumgbulagang. Just below the twon of Tsetang there was a 14th-century iron suspension bridge built across the Yarlung Tsangpo River bu the famous engineer, Tangtong Gyalpo, with a span of 150 to 250 meters, and only 5 large stones supporting. A modern bridge has been built a few kilometers downstream.
To the north of the town was the Gonpiri, 1 of the favourite resorts of Avalokteswara, and where according to tradition, the monkey king and the goblin raised their family of monkeys from which ultimately descended the Tibetan race. There are 4 lamaseries around Tsetang, and in the town are some 15 Nepalese, 20 Chinese and 10 Kashimiri shops besides native traders from all parts of Tibet. Mutton and butter were abundant.

Transportation in Tsedang has been greatly improved with the building of a road network which is more than 3,700 km long. The road network with Tsedang Town as the center connects 12 counties and extends to most villages. Tsedang is only 191 kilometers away from Lhasa. There are shuttle buses between Lhasa and Tsedang everyday. Besides, there is  the only international airport in Lhoka of Tibet, Gonggar Airport which is only 97 kilometers away from Lhasa City.

1. Traveling Hours: 1 day
2. Traveling Seasons: All year, and the best time to travel is from April to May and September to October.
3. Be aware of the changeable weathers and bring some warm clothes with you.
4. The road along the Yarlung Tsangpo Valley is not very good, so choose your car wisely.
5. Just in case you won’t see any villages or people along the road, you need to prepare some extra food and water.
6. The altitude here is relatively high. You may as well take some meds in advance.