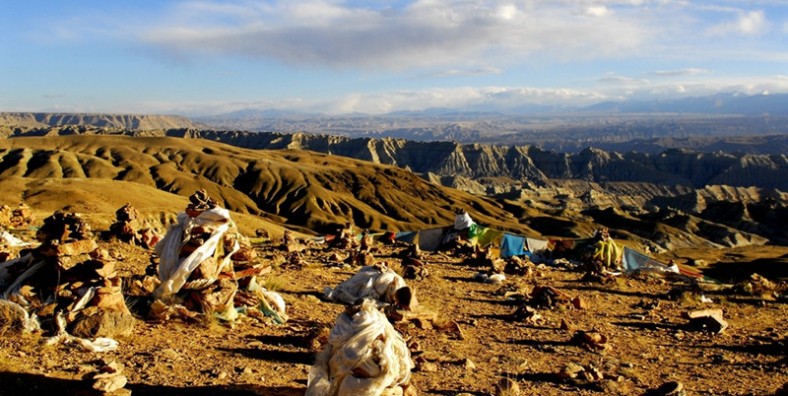 Situated between the Himalayas and the Transhimalaya, Zanda national geopark is a fantastic world of a great variety of earth forests stretching for nearly 100km. Altitude varies from 3,750 meters to 4,450 meters, and the whole area is about 2,464km.The landscape of steeps and cliffs is diverse, craggy and spectacular. Some are like castles, towers or pagodas.

Zhada, which means the place where grass in the lower reaches of river in Tibetan, is one of the counties under the administration of Ngari Prefecture. The earthen forest is formed by erosion of water. Zanda Earthen Forest(Chinese name: 扎达土林) is the sediment stratum of lakes and rivers, mainly composed by sandstone and clay. This peculiar and mystic physiognomy densely covers the whole Zhada. During the Xiangxiong and Guge kingdoms, people used this kind of natural resource to make caves to live. Now, more than 400 caves can be found in the earthen forest.

Entering into Zanda, you will find that the earthen forest standing on both sides of Elephant Spring River winding over more than five kilometers. Some are like the warrior defending the mountain top, some like thousands of horses galloping, and some the devout followers cultivating themselves, standing there quietly. From different angles, you can get different wonderful view.

Travel to Zanda County, visitors would better start from SHiquan River taking a taxi for about CNY 2000 about 12 hours for convenience, but it’s too expensive.

The Shiquan River has a shuttle bus to Zanda, which is normally start at noon every day, but less likely to cancel, the ticket price is 220 ~ 260 yuan, which can be negotiated.