An ancient kingdom and its modern-day protector 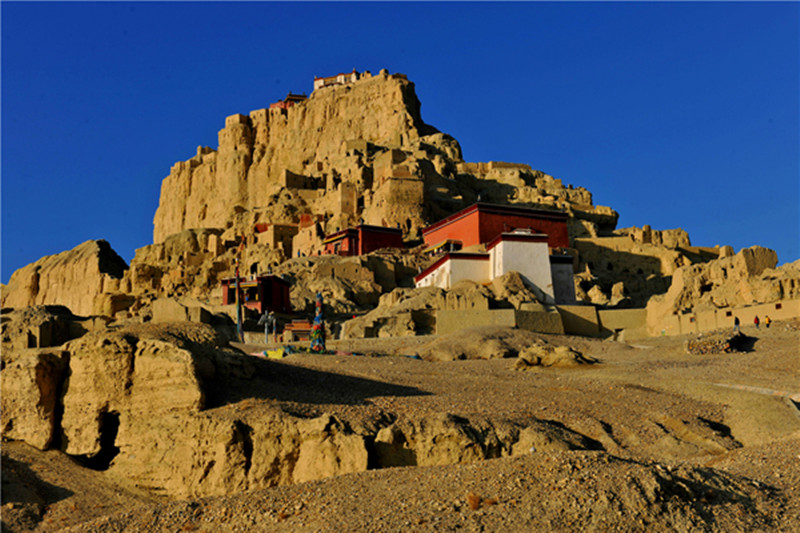 Every year, about 100,000 people visit the ruins of a mysterious ancient kingdom in western Tibet. Most are tourists who pass through briefly, but not Basang Cering.

He studied a traditional Tibetan painting technique called thangka in Tibet University, and became a civil servant in Zanda County after graduation. But two months later, Basang requested to work at the visitors’ center of the Guge ruins, which is protected as a state-level heritage site.

“It’s a beautiful yet distant flower,” he said. “I wish to come closer and guard it.”

The ancient Guge Kingdom was probably founded in the 10th century but it was abandoned by the end of the 17th century. Only the mud-and-rock structures remained, sheltering their relics and wall paintings from the elements.

Besides Basang, only three other people work at the ruins, preserving and protecting the site, as well as sharing the kingdom’s history with visitors.

Despite the passing of time, colors in the murals of farming, hunting, and ancient dwellers’ ceremonies are remarkably well-preserved. Basang Cering and his colleagues know the stories behind every painting.

However, they have to be very careful accompanying visitors to enter each chamber, locking it after each tour to minimize damage such as cracks in the walls and landslides. In the past few decades, increased rainfall on the otherwise dry plateau has made preserving the site all the more challenging.

The government has launched three “rescue and preservation” projects to protect the ruins, the biggest of which began in 2011, costing 57.4 million yuan (about 8 million U.S. dollars).

This involved repairing structural damage and fortified the earth around the surrounding rocky mountains as well as work on the ancient murals.

For Basang, the best thing about this job is being surrounded by the paintings. He draws the ruins with devotion in his spare time.

For most people, this would be a lonely, even boring life. But for Basang this is bliss: “I found what I really want here, and nothing else matters.”