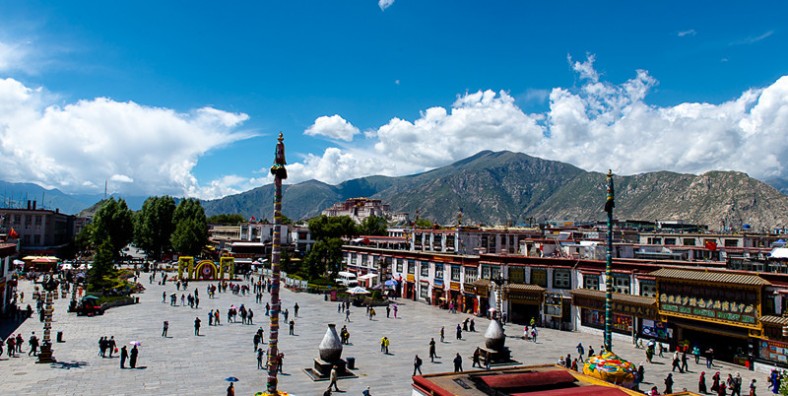 The Barkor is a popular devotional circumambulation for pilgrims and locals. The walk was about one kilometre long and encircled the entire Jokhang, the former seat of the State Oracle in Lhasa called the Muru Nyingba Monastery, and a number of nobles’ houses including Tromzikhang and Jamkhang. There were four large incense burners (sangkangs) in the four cardinal directions, with incense burning constantly, to please the gods protecting the Jokhang.[1] The Tromzikhang market is busy in Barkhor, and the area is a major tourist attraction.

Because the Jokhang Temple has been a symbolic center of Tibetan protest since 1987, the Barkhor has also seen many demonstrations. In 1989, when year the 14th Dalai Lama won the Nobel Peace Prize, pro-Dalai Lama residents threw tsampa around the Barkhor to celebrate. After the Central government denounced the prize, residents who continued such demonstrations were arrested.[2] The square was briefly closed by riot police during the 2008 Lhasa violence.[3]

Barkhor Street is an area of narrow streets and a public square. The street is a good place for visitors who want to learn about Tibetan culture, economy, religion and arts. The square is a transportation center. The 20 minute hexagonal circuit, running clockwise around the Jokhang Temple and other structures, especially at dawn and dusk.

Location[edit]
Barkhor Street is located in the old city of Lhasa, the famous specialization and commercial center, which has preserved the ancient city full of traditional outlook and lifestyle. The street is just a single pilgrimage road around Jokhang Temple. The Tibetans called it “Holy Road”.

History[edit]
In 647, Songtsen Gampo who is the first Tibetan King built the Jokhang Temple. It can attracte thousands of Buddhists from around the world because of its magnificence. Then the origin of Barkhor street appeared. Today you can see some pilgrims walking or progressing body-lengths by body-lengths along the street. Most of them are teenagers and have experienced thousands of miles’ walking to reach this sacred place, which express their piety for the holiness of religion.

Visit Tips[edit]
1. According to Tibetan traditions and faith, you should walk clockwise in Barkhor Street.
2. You should bargain whenever you want to buy things, because the same kind of good would be sold at different price in the different shops.
4. Tibetan knives can not be consigned by flight. Please ask the local retailer how to mail it before you purchase.
5. According to Tibetan traditions, the first and the last buyer would bring good luck to vendors, So they would always give favorable discount to the buyer.
6. All foreign visitors to Tibet need one or more permits. The basic one is the Tibet travel permit which can be issued by travel agencies that is registered at Tibet Tourism Bureau in Lhasa.
Shopping[edit]
Generally speaking, Barkor Street is a market place for visitors. It has many small shops, small stalls, cheap restaurants on both sides of the street. The shops sell all kinds of hand-made souvenirs, such as: Buddhist Thangkas, prayer flags, statues, prayer wheels, butter lamps, incense, beads and more. A wide selection of Tibetan housewares, such as: cushions aprons, leather bags, handmade quilts and carpets, knives, hats, and local style dishware. Furthermore, some shops sell “Thangka” ( the Tibetan scroll painting ), which is an unique art with the themes of religion, history, literature, science and customs. There are also some articles from India and Nepal in the street as well. To sum up, whether your taste on extraordinary or souvenir, Barkhor market has something of Tibetan culture for every shopper’s preference.

Ticket[edit]
There is no entrance ticket for visitors to do a Pilgrimage kora at Barkhor Street. If visitors want to visit the Jokhang Temple, the ticket is CNY85. You can actually visit Barkhor Street all year round, yet you may as well stagger the rainy season (May to Oct.) and freezing weather. Barkhor Street is more alive in Tibetan festivals or momentous ceremonies.

Get in and Get Out[edit]
The bus No. 6, 9, 25 have a stop at the neighbor. Visitor can also take a taxi there or walk there from Potala Palace.

Accommodation[edit]
There are lots of snack bars and sweet tea houses along Barkhor Street. You can drink tea, eat local yogurt, potato and beef rice. The most famous Magyia Ngami Restaurant is located at the southeastern corner of Barkor Street. It is a place that visitors cannot miss.

Top Things to Do[edit]
Shopping
Taste Tibetan food
Pilgrimage kora
Photography
Itineraries[edit]
Usually, most of visitors would like to arrange their Lhasa day tour to Potala Palace, Jokhang Temple and Barkhor Street at the same day. These three attractions are located at the center of old Lhasa city. When visitors are doing a pilgrimage kora at Barkhor Street, please follow the local pilgrims and pay more attention to the kora direction which is clockwise direction, from the right, the back to the left of Jokhang Temple.