Tsedang Town（泽当镇）, the capital of Lhoka（山南区）, is reputed as “The Cradle of Tibetan Civilization”, and located at the middle and lower reaches of Yarlung Zangbo River（雅鲁藏布江）. As the birthplace of earliest Tibetans, it enjoys a comparatively mild climate and vast fertile land. A field in the village near Tsedang Town is said to be the first farming field in Tibet. Tsedang Town boasts a combination of natural and cultural scenery. Spectacular ranges, beautiful lakes, numerous springs and peaceful river valleys constitute its featured landscapes.

▪ Trandruk Temple: Trandurk Temple is a monastery of Gelug sector, which was built during Srongtsen Gampo was in power. It’s said that Padma Sambhava and Milarepa has been practiced nearby.

▪ Samye Temple: The famous murals in Samye Temple record the historical affairs of the introduction of Buddhism and many buddhist stories.

Other Destinations in Tsedang Town

Tsedang tourist attractions consist of both cultural and natural sights offering tourists insights into "the cradle of Tibetan Civilization", the specutacular landscapes on birthplace of Tibetan people. There are some scenic spots below including  Yungbulakang Palace( ealiest palace in Tibetan area with a long history of more than 2100 years), Trandruk Temple( built during Srongtsen Gampo was in power) and Samye Temple (recording the historical affairs of the introduction of Buddhism and many buddhist stories). [...]

Tsedang Tour is one of the stunning cultural tours in Tibet, which will bring tourists to explore the beauty and mystery of Tibetan Buddhism in Tibet's most renowned palaces, temples and monasteries. This tour can include: Yumbulakang Palace (Tibet's first palace), Samye monastery (Tibet's first monastery), and Trundruk monastery (which has a long and amazing history and boasts many sculptures and paintings from very ancient times. In Trunkdruk monastery, we will obverse a breathtaking Tangkha of Pearls decorated with a total [...] 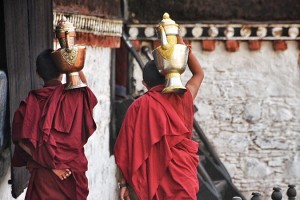 With an annual  average temperature of 8 ℃ to 9 ℃, the hottest average temperature can reach to 15.7 ℃.The annual precipitation 302mm. With the strong sun radiation and the long sunshine time,  the agriculture is developing, which is known as the 'Tibet granary'. [...]

Transportation in Tsedang has been greatly improved with the building of a road network which is more than 3,700 km long. The road network with Tsedang Town as the center connects 12 counties and extends to most villages. Tsedang is only 191 kilometers away from Lhasa. There are shuttle buses between Lhasa and Tsedang everyday. Besides, there is  the only international airport in Lhoka of Tibet, Gonggar Airport which is only 97 kilometers away from Lhasa City. [...]

Most Tibetan festivals are full of the color of  religion. In addition to annual large-scale worship rituals to Buddha and Buddhist masters, Tibetan people will also hold a series of festivities associated with religious life and agricultural production consisting of religious festivals and folk ones. There are almost a hundred festivals in a year, some of which even last for ten days. During the festival, Tibetan people will hold a variety of folk and religious activities, where you can enjoy the [...]

Best Travel Time Lhoka enjoys a moderate dry climate and distinctive four seasons. Its highest temperature, a little more than 20 degrees centigrade, lasts from June to August; while the lowest temperature may drop to 10 degrees centigrade below zero and usually occurs in December and January. Therefore, the best travel time for tourists is from June to August. The temperature between day and night varies greatly, so you can bring some clothes in different thickness.  Avoid High Altitude Sickness Lhoka is located at [...]

The maps give tourists an overview of Tsedang and  Lhoka. In this case, tourists can get a clear idea about where they are and where they want to go in Tibet. [...]

Although the hotels in Tsedang Town, the administrative center of Lhoka prefecture, can not offer facilities and services as good as those at the same level compared with other big cities of China. The accommodation facilities are expanding to meet the growing demands of tourism, which it is still easy to find hotels at all level except five-star hotels. You can find starred hotels, unstarred hotels, hostels or guest houses. In other places of Lhoka, there are budget hotels, hostels [...]