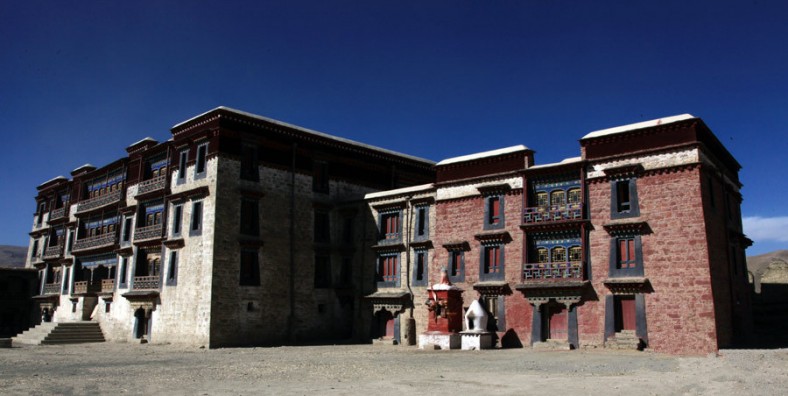 Ancient Palace Zhaxi Qunzong which covers a total area of 7,000 square meters is surrounded by stone walls. And now there are only ruins in the east and south wall. The main entrance of the building is carved with lotus, peony and other patterns. There are engravings and painted lotus on the post.

New Palace Gandan Lazi is the main construction of the existing building of this palace, which is located in the northeastern part of the whole building of Jiali Wangfu Palace. It consists of a series of construction units such as the palace, the warehouse, Lacan, the square and the stables, etc. The total area of the building is nearly 16 million Square meters.

Xiagong Palace situated near Jiangzha Pujiu River on the north and Gaoya Cliff on the south with an altitude of 3840 meters. The original building, including the palace wall, bath, etc. It no longer exists now. Xiagong Palace is used to be the summer resort, now only a small palace. The palace is located in this county administrative office building about 50 meters northeast, for the courtyard palace.

The year of the initial construction of Jiali Wangfu Palace has been difficult to study in detail. According to the characteristics of existing buildings and the comprehensive analysis of the survey data, it is speculated that the three stages of the palace construction are as follows:

Jiali Wangfu Palace has basically maintained the original layout and architectural structure, which is extremely precious in the unique category of the ancient royal palace architecture in Tibet. As the Tibetan palace building, Jiali Wangfu Palace integrates some elements of Chinese ancient architecture, and thus has a more essential and significant research value. It was listed as the key cultural relic protection unit of Tibetan Autonomous Region on April 16th, 1996, and was listed as a national key cultural relic protection unit on June 25th, 2001.